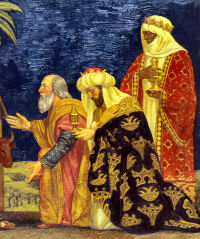 Grant us, almighty God, that the bringer of your salvation, who for the world's redemption came forth with newness of heavenly light, may dawn afresh in our hearts and bring us constant renewal. Who lives and reigns with you in the unity of the Holy Spirit, God, for ever and ever. 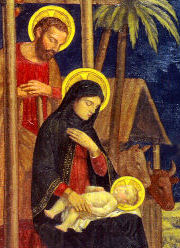 Where did the Magi come from? Saint Matthew gives a general answer: "Wise men from the East." In modern terms, it could have been from any one of the countries of Arabia, Iraq, Iran, Afghanistan, or India. It has never been exactly determined from which of these countries they came. Quite early in the Christian era a popular tradition conferred on them the title of "kings". This tradition became universal at the end of the sixth century. It was based on Biblical prophecies which described the conversion of the pagans and, although not referring to the Magi, were applied to their visit:

The legendary relics of the Magi were brought from Constantinople to Milan in the sixth century. In 1164 Emperor Frederick Barbarossa obtained them from the archbishop of Milan and transferred them to Cologne. Their shrine in Cologne was, and still is, the center of many pilgrimages. The Fifteenth Day of Christmas 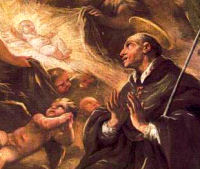 Some of St. Lawrence's special charisms were the gift of tears, power over devils, prophecy. One Christmas night the Christ-Child appeared to him. When an attempt was made during his last sickness to put him on a more comfortable bed, he refused this pleasure with the words, "My Savior died not on feathers but on the hard wood of the Cross," and requested to be laid on his usual couch. As he felt his last moments approaching, he lifted his eyes to heaven and said, "I am coming, good Jesus, to You," and slept blessedly in the Lord (January 8, 1455). At the time Venice was at the zenith of its influence and wealth. But God made that proud city understand that her greatness resulted more from the sanctity of her poor patriarch Lawrence than from the diplomacy of her doges and the power of her galleys.—Excerpted from The Church's Year of Grace, Pius ParschSymbols: Bishop’s mitre; bishop’s crosier.Things to Do: