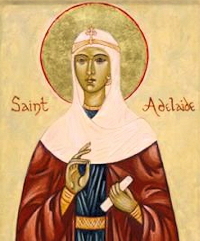 We are the blind offspring of the children of pitiful EveBringing with us the shadows born of an age-old error.But when God deigned to assume the mortal formOf a human nature, then came forth from the VirginA world of salvation.... Carmen 4, Sedulius

According to the 1962 Missal of Bl. John XXIII the Extraordinary Form of the Roman Rite, today is the feast of St. Eusebius which is celebrated in the Ordinary Form of the Roman Rite on August 2. Historically it is also the feast of St. Adelaide, daughter of the king of Burgundy. Throughout her life she received strong suport from the abbots of Cluny, with whom she was on terms of close friendship. 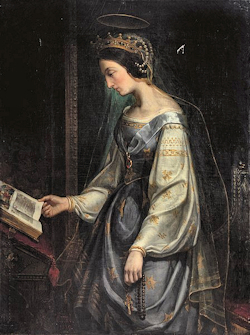 St. Adelaide was a truly remarkable woman. She was the daughter of the king of Burgundy, and was married to Lothair of Italy, the son of the ruler of Provence as a means of ending a feud. When her husband was murdered by a rival prince, she was shut up in captivity by Berengarius of Ivrea, until rescued by the emperor Otto the Great, who married her. Otto I became Holy Roman Emperor and Adelaide, his Empress. She ruled with her husband until his death, at which time she was badly treated by her son Otto II, and later her jealous daughter-in-law who was co-regent with Adelaide for her grandson Otto III. The daughter-in-law Theophano had her banished from the court twice, yet Adelaide remained steadfast and faithful, known for her liberality in giving and her piety; and eventually she was restored to court as the regent for her grandson Otto III. She was active in the reforms of the great abbey at Cluny, and reposed in 999. She took as her counsellors St. Adalbert of Magdeburg and SS. Majors and Odilo of Cluny. After Otto was old enough to reign on his own, Adelaide retired to the convent of Selta (Selz Abbey) near Cologne, a house she had built. Though she never became a nun, she spent the rest of her days there in prayer. The Abbey is no longer in existence. Some of her relics are enshrined in Hanover.

Despite her exalted status, she was a wife and mother, and lived both hard times and good, always faithful to her Lord, and always ready to give generously to those in need. She never took revenge on her political enemies once she gained the regency and it was said that her court was much like a monastery itself in its piety. She is a reminder to me that regardless of how much or how little I may have, my work remains the same.—Excerpted from Panagia Icons and A Dictionary of Saints by AttwaterPatronage: abuse victims; against in-law problems; brides; empresses; exiles; parenthood; parents of large families; people in exile; princesses; prisoners; second marriages; step-parents; victims of abuse; widows; Symbols and Representation: empress dispensing alms and food to the poor, often beside a ship; escaping from prison in a boat; holding a church; veilHighlights and Things to Do:

Ember Friday of Advent
Station at the Twelve Holy Apostles (Santi Dodici Apostoli, also Santi Apostoli):
The stational church for today's Mass is the church of the Twelve Apostles in Rome. Mary is the apostle of the liturgy, the Mediatrix of all grace. She is the root from which springs the full bloom, Christ. "And of His fullness we all have received, and grace for grace" (John 1:16). It was erected by Julius I (337-352) over the barracks of ancient Rome's firemen and entrusted since 1463 to the Conventual Franciscans. Originally dedicated to the Apostles St. James and St. Philip, it was rededicated to all the Apostles in the 16th century. It is currently in the care of Conventual Franciscans.
For further info, see:
Rome Art Lover
Walks in Rome
PNAC