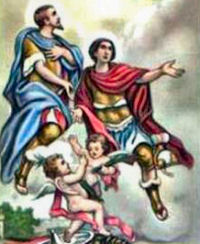 Show gracious favor, O Lord, we pray, to the works of penance we have begun, that we may have strength to accomplish with sincerity the bodily observances we undertake. Through our Lord Jesus Christ, your Son, who lives and reigns with you in the unity of the Holy Spirit, one God, for ever and ever.

According to the 1962 Missal of Bl. John XXIII the Extraordinary Form of the Roman Rite, today is the feast of Sts. Faustinus and Jovita, two martyrs of Brescia, in Italy, where they are the patrons of the city. A late account of their martyrdom makes them two brothers, one, Faustinus, a priest and the other, Jovita, a deacon.Stational Church