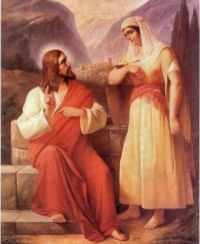 O God, author of every mercy and of all goodness, who in fasting, prayer and almsgiving have shown us a remedy for sin, look graciously on this confession of our lowliness, that we, who are bowed down by our conscience, may always be lifted up by your mercy. Through our Lord Jesus Christ, your Son, who lives and reigns with you in the unity of the Holy Spirit, one God, for ever and ever.

He found in the temple area those who sold oxen, sheep, and doves, as well as the money-changers seated there. He made a whip out of cords and drove them all out of the temple area, with the sheep and oxen, and spilled the coins of the money-changers and overturned their tables, and to those who sold doves he said, "Take these out of here, and stop making my Father's house a marketplace." His disciples recalled the words of scripture, "Zeal for your house will consume me (John 2:12-14)."

Sunday Readings
The first reading is taken from the Book of Exodus 20:1-17. When God had freed the Chosen People from the slavery of Egypt, He led them to Mount Sinai. There he made a Covenant with the Israelites through which He promised to make them His own people, to lead them into the Promised Land, and to protect them from their enemies there. The Israelites were to reverence Him and Him only as their Lord, and they were to obey the moral and cultic laws which He laid down for them.

The second reading is from the letter of St. Paul to the Corinthians 1:22-25. In these few sentences St. Paul gives us the basic reasons which motivated opposition to the gospel message on the part of Jews and Gentiles. The Jews because Christ did not fit the preconceived ideas they had formed of the Messiah and the Gentiles because they looked to philosophy or human "wisdom" for the solution of man's problems.The Gospel is from St. John 2:13-25. If we had only the Synoptic gospels (Mt., Mk., Lk.) we could easily conclude that Jesus spent almost all his public life and did all his preaching in Galilee and its neighborhood. St. John who wrote his gospel several years later corrects this false impression by mentioning visits made by our Lord to Jerusalem, He gave the "leaders of the people" in Jerusalem plenty of opportunity of hearing his message and his claims. He also worked some astounding miracles in or near the city. For instance, the man crippled for thirty-eight years (Jn. 5); the man born blind (Jn. 9), the raising of Lazarus; who had been four days buried (Jn. 11). St. John makes it very clear that the leaders (the priests and Pharisees) in Jerusalem were given every opportunity to learn who Jesus was, and every help to believe in him, but they would not. The fault was theirs, therefore, and the loss. 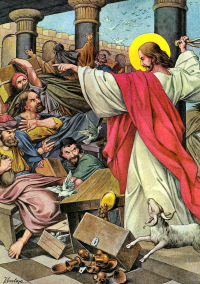 On this particular visit he made it clear to them that he was someone special, someone close to God whose house they were desecrating, and whom he even called his Father. In hidden language he told them that they would put him to death but that that would not be the end, for he would rise again. Some of them seem to have remembered this saying of his after they had put him to death, for they asked Pilate to place a guard on his tomb lest his disciples should remove the body and pretend he had risen for: "we recall," they said, "that this impostor said while he was still living, 'after three days I shall rise again"' (Mt. 27 : 63). But even the miracle of his resurrection did not affect the majority of them. They had made up their minds and "there are none so blind as those who will not see."The reasons for their blindness were the same as those that keep millions of the neo-pagans of today from accepting and living the Christian faith. These, like the priests and Pharisees of Jerusalem in the year 28, are so immersed in the affairs of this world that they can give no thought to their own future. Their eyes are so fixed on the earthly objectives that they have set themselves, that they can see nothing else. The priests and Pharisees wanted more than political freedom from Rome. They had hopes that their Messiah would give them a great world empire, and with it wealth and power without limit. Our contemporaries' aims may not go so far, but worldly aims are important enough in their eyes to make them exclude from their minds the thought of anything higher. Yet, they have more than enough reminders whichever way they turn to recall their minds to the historical facts of Christianity. This is 2006 A.D., that is 2006 years since the birth of Christ. Who was he, why was he born, why does the world divide its history into before he came, B.C., and after he came, A.D.? In every town and village of our once Christian western world there is a church or two with steeples pointing to the sky. Why? What do churches mean to men? Near every town there are cemeteries or "sleeping places," according to the meaning of that Greek word. Are those buried there only sleeping and waiting to be called, if not already called, or are they finished forever just like the ox or the unthinking cow that may be buried in the next field.The agnostics and free-thinkers of our day should start to think about the real facts of life—the central ones of which are that Christ, who was the Son of God, took our human nature and lived for some time on this earth, so that he would raise us up to sonship with God. He suffered crucifixion, because the world was full of sin when he came. But his death made atonement to the heavenly Father for all the sins of the world. His resurrection from the dead was the prelude and the guarantee that we shall all rise to a life of glory in heaven, if only we have followed him faithfully during our years on earth.Excerpted from The Sunday Readings by Fr. Kevin O'Sullivan, O.F.M.

The Station is in the basilica of St. Lawrence outside the walls. The name of this, the most celebrated of the martyrs of Rome, would remind the catechumens that the faith they were about to profess would require them to be ready for many sacrifices. In the primitive Church, the third Sunday in Lent was called Scrutiny Sunday, because it was on this day that they began to examine the catechumens, who were to be admitted to Baptism on Easter night.

Commentary for the Readings in the Extraordinary Form:
Third Sunday of Lent

"When (Jesus) cast out the devil, the dumb man spoke." But as indicated by the little whining group to the right, some complained: "By Beelzebub, the prince of devils, He casts out devils" (Gospel).

Formerly, on this day, candidates were examined in preparation for Baptism on Holy Saturday. The first effect of Baptism is to free the souls from the power of the devil. The house of which Jesus speaks, is the human soul before His coming, degraded by idolatry, by sensuality, under the tyranny of the evil spirit.Mary holding the Infant (pictured in the upper left corner) is a symbol of our Baptism. Mary gives birth to us as members of the Mystical Body of her Christ. Moreover, like her, "blessed are they who hear the word of God and keep it" (Gospel).These baptismal duties of death to sin and life in God (Epistle are meant to gladden, not to oppress the human heart (Offertory), intended by God for Divine possession (Communion Verse), safe from diabolical obsession.Excerpted from My Sunday Missal, Confraternity of the Precious Blood
Stay in Touch!
Subscribe to Insights...free!
News, analysis & spirituality by email, twice-weekly from CatholicCulture.org.