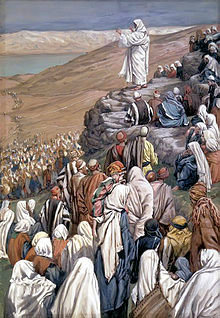 A leper came to him (and kneeling down) begged him and said, "If you wish, you can make me clean." Moved with pity, he stretched out his hand, touched him, and said to him, "I do will it. Be made clean." The leprosy left him immediately, and he was made clean (Mark 1:40-42).

Sunday Readings
The first reading is taken from the Book of Leviticus 13:1-2, 44-46 and concerns the regulations enforced by the priests regarding certain bodily diseases which made a person unclean and a menace to the health of his neighbors.

The second reading is from the First Letter of St. Paul to the Corinthians 10:31, 11:1 and speaks of our imitation of Paul as he imitates Christ for the sake of the Gospel, as well as of the unity of the Church of God.The Gospel is from St. Mark 1:40-45. We see both the divine power and the divine compassion of Jesus in this act of healing. The divine power was necessary in all instantaneous cures. Even if the diseases were curable, the ordinary process of nature took time to fight off the causes and to return to normality. Therefore, where there was an instantaneous recovery some power above nature, some supernatural cause brought it about. But where the disease was incurable, as real leprosy then was, to remove it by a simple word of command was more emphatically still the result of divine power. This divine power Jesus had, for he was himself divine, the Son of God. His compassion for suffering humanity was, however, co-terminus with his power, it was also divine. It was out of compassion for the sad lot of the human race on earth that he descended to man's level, becoming man, equal to us in all things except sin, in order to suffer with us and for us. By his human sufferings he made an atonement, a satisfaction for all the sins of the world —a satisfaction which all mankind could never make—to his heavenly Father, and so obtained for us God's pardon. At the same time, 'by joining our human nature to his divine nature, he brought us into the divine orbit and made us adopted sons of God and heirs of the eternal life of the Blessed Trinity. Because this seems almost too good to be true, there are men who deny it or refuse to accept it. Such men make the mistake of measuring the infinite compassion of God with the limited yardstick of their own finite and puny compassion. Thanks be to God, for his infinite compassion! Thanks be to God, for Christ his Son, who came and dwelt amongst us! He put heaven and a share in the life of God within our reach; he has shown us how to attain them, giving in his Church and the sacraments, all the necessary aids. But we still need all of Christ's compassion if we are to get there. Because of our inclination to sin and because of the many times we unfortunately give in to that inclination, nothing but the mercy of God can save us from our own folly. However, that mercy is available, if only we ask for it. What we sinners need is the faith and confidence of the leper in today's gospel reading. He believed firmly in the power and the mercy of Jesus. "If you will, you can make me clean," was his approach to Jesus. This should be our approach too, if we have the misfortune to fall into serious sin. Jesus does will and does want our salvation. His incarnation, and death on the cross, proves that. The fact that he left the power to forgive sins to his Church is another proof of both his will and desire to help us. "All power has been given to me in heaven and on earth," he stated. Part of that power which he left to his Church is in the sacrament of penance where the leprosy of sin can be washed away and the sinner restored to new and perfect spiritual health. What folly for any Christian then, to commit sin and isolate himself, like the unclean leper, from God. But it is greater folly still, to remain in this unclean state when the cure for his disease is so easily available to any sincere penitent. — Excerpted from The Sunday Readings by Fr. Kevin O'Sullivan, O.F.M.

Every springtime God, as it were, rewrites the Book of Genesis and Creation. Appropriate to the coming spring, Jesus is now pictured as the Divine "Sower." He sows "seed" in the soil of our souls, covered with "rocks" of hardening pride, "thorns" of softening "pleasures!"The Epistle is a vivid picture, moving in quick action over Europe and Asia, but above all moving our souls to action as it describes the sacrifices of Paul, the "sower," sowing the "word of God," despite passions from within, persecutions from without.— Excerpted from My Sunday Missal, Confraternity of the Precious Blood
Find us on Social Media.