Thursday of the Second Week of Ordinary Time 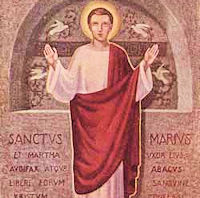 According to the 1962 Missal of Bl. John XXIII the Extraordinary Form of the Roman Rite, today is the feast of Sts. Marius, Martha, Audivax and Abachum, a group of Roman martyrs of the third century. St. Canute was king of Denmark; he was put to death out of hatred of his faith and his zeal in working for its extension in his kingdom. He was killed in St. Alban's Church in Odense.

Finnish cultural tradition has taken a macabre interest in speculating about the fate of Lalli, the murderer. All traditions agree that Lalli died soon after Henrik, unrepentant and tormented. The favorite story of Lalli tells how he came home from the murder wearing the bishop's mitre. When he went to remove it from his head, his scalp came off with it; thus St. Henrik is often depicted in medieval iconography standing on top of Lalli, who is always depicted as bald. Other stories tell of Lalli being pursued relentlessly by a band of mice who constantly tried to eat him alive. There are tales of Lalli climbing a tree or moving from house to house to escape the gnawing mice; finally he seeks refuge at sea, but the mice some how find him and he and the mice end up drowning together. The gnawing mice which relentlessly seek to devour Lalli are an apt symbol of the gnawing of conscience.Henrik soon became the national saint of Finland, although he was largely ignored outside of Scandinavia. In Scandinavian countries, his feast day (January 20th) is the occasion of a tremendous festival called Heikinpäivä. The Heikinpäivä festival, though originally a Finnish solemnity, is actually more important in other areas of the world that were settled by Finns than in Finland itself, which has lost touch with much of its Catholic past. The region of the world that is best known for its festive celebration of Heikinpäivä is Michigan's Upper Peninsula, which was settled by Finns in the 19th century. The Michigan celebrations are largely civic and cultural in nature, having lost a lot of the relevance to the martyr-saint, but it is still a real treat to visit the north during the time of the this festival.--Excerpted from Unam Sanctam CatholicamPatron: Against storms, Finland.Symbols: Bishop being murdered at Mass with young King Saint Eric; bishop being murdered by a man wielding an axe; trampling on Lalli.Things to Do: