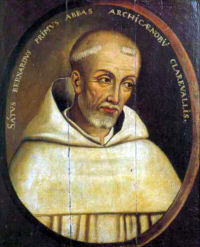 Heavenly Father, Saint Bernard was filled with zeal for your house and was a radiant light in your Church. By his prayers may we be filled with this spirit of zeal and walk always as children of light. We ask this through our Lord Jesus Christ, your Son, who lives and reigns with you and the Holy Spirit, God, for ever and ever. Amen.