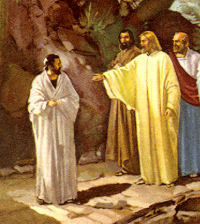 The feast of St. Anthony Zaccaria (which would normally be celebrated today) is superceded by the Sunday Liturgy. Sunday Readings
The first reading is taken from the Book of the Prophet Ezekiel 2:2-5 and treats of the Exekiel's appointment as prophet among the exiles in Babylon.The second reading is from the Second Letter of St. Paul to the Corinthians12:7-10. St Paul feels forced to prove that he was a true Apostle — who suffered much for Christ and his Gospel and who also had been given the privilege of special visions and revelations. He goes on to describe some weakness he had which troubled him very much. He concludes that he is content with weakness and sufferings because the power and strength of Christ, working through a weak instrument, will be all the more visible and convincing. The Gospel is from St. Mark 6:1-6. What happened in Nazareth was a foretaste of the later reaction of the scribes and Pharisees, the leaders of the people, to Christ's claim to be the promised Messiah. What the people of Nazareth tried to do (Lk. 4:29-30), the religious authorities in Jerusalem succeeded in doing, because they were able to threaten the Roman governor with blackmail. Even in their wickedness and unknown to themselves, they were putting into action God's plan for mankind. It was necessary that Christ should die so that all men could live forever with God. Christ's death, followed by his resurrection, was the key that opened the door of eternity for the human race. Unfortunately for the leaders of the Jews, the good end did not justify the evil intentions and evil means which they used. It is hard to understand the irrational opposition of the Nazarites on this occasion, and of the Pharisees of Jerusalem later. The people of Nazareth had heard nothing but marvelous reports of his wonderful preaching and outstanding miracles. One would therefore expect that if they were at all reasonable, they would rejoice on having one of their fellow-citizens admired by thousands and looked upon by so many as the long-promised Messiah. Instead, they turned against him in bitter hatred and there and then decided to put an end to his career (Lk. 4:29). Why? Because the demon of envy, a daughter of pride, laid hold of their hearts and minds. Why should a neighbor's son, and one of a lower status than many of them—a mere carpenter, be given this privilege while their sons were passed over? This could not be, their envy told them, and so they shut their minds against any proof to the contrary. It was the same later in the case of the Pharisees. The same vices, pride and envy, darkened their intellects and prevented them from seeing the truth. They were the religious leaders of the people, or so they thought themselves to be. If the Messiah had come they felt that he should have come through them and with their approval. This impostor Jesus could not possibly be the Messiah. Not only was he not keeping the law as strictly as they kept it, but he was friendly with sinners and tax-gatherers. Furthermore, he was talking of some faraway kingdom in heaven and not of the earthly empire which they decided the real Messiah would establish. They had not only heard of his extraordinary miracles but had seen some of those who were cured. In Bethany only a few miles from Jerusalem Lazarus had been raised to life after four days in the grave. They tried very hard to deny these miracles (see Jn. 9: the man born blind), and they even thought of killing Lazarus to make the people forget the miracle! (Jn. 12:11). Thus their pride and envy made them irrational. Nothing but the cruelest possible death of the one hated could satisfy their hatred. But that very death was Christ's road to glory. Lifted up on the cross he drew all men to himself as he had foretold (Jn. 12:32). Those on Calvary beheld the triumph of failure. Would that all the opposition to Christ and his teaching, caused by human pride and envy, had ended with the Nazarites and Pharisees! Far from it. Pride and envy are still rife among us. All through the twenty centuries of Christianity, there have been proud men, men high in their own esteem. Not only would they not have Christ to reign over them, but they have tried to prevent his reign over even those who are gladly and proudly his subjects. Not content with dethroning Christ in their own hearts and minds, they have devoted all their energies to abolishing him and his Church from the face of our earth. Such enemies of Christ are still among us. They are more numerous than ever today but just as their predecessors failed in the past, so will these fail today. Christ will continue to reign and his Church will continue its mission of leading to heaven all men whose minds are free from sinful pride and therefore open to the truth.Let us renew our loyalty to Christ today. He humbled himself so that we might be raised to the standing of sons of God. He shared our human nature with us so that we could share his divine nature. He died a cruel death on Calvary so that we could have an eternal life in heaven. We pray for light for those whose foolish pride has left them groping in darkness. Let us also ask the good God to keep us ever on the road of truth, the road of Christian humility which leads to the eternal home which Christ has won for us by his incarnation. Excerpted from The Sunday Readings by Fr. Kevin O'Sullivan, O.F.M.