Saturday of the Twenty-Second Week of Ordinary Time 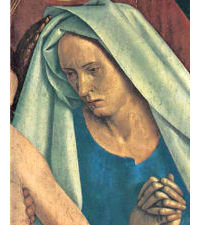 Almighty God, our hope and our strength, without you we falter. Help us to follow Christ and to live according to your will. We ask this through our Lord Jesus Christ, your Son, who lives and reigns with you and the Holy Spirit, God, for ever and ever. Amen.

Mary suffered because of her intimate union with Christ, on account of our sins, and on behalf of her spiritual children. Devotion to the Mother of Sorrows and the Seven Sorrows of Mary encourages us to flee from sin and inflames our desire to do penance and make reparation so as to console the Hearts of Jesus and Mary. — The Catholic Faith, John O'Connell 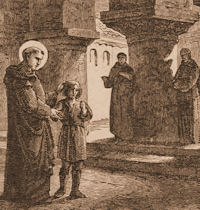 "Who could be unfeeling in contemplating the Mother of Christ suffering with her Son?" chants the Stabat Mater; and immediately it adds, "O Mother... make me feel the depth of your sorrow, so that I may weep with you. May I bear in my heart the wounds of Christ; make me share in His Passion and become inebriated by the Cross and Blood of your Son." In response to the Church's invitation, let us contemplate Mary's sorrows, sympathize with her, and ask her for the invaluable grace of sharing with her in the Passion of Jesus. Let us remember that this participation is not to be merely sentimental—even though this sentiment is good and holy—but it must lead us to real compassion, that is, to suffering with Jesus and Mary. The sufferings God sends us have no other purpose.The sight of Mary at the foot of the Cross makes the lesson of the Cross less hard and less bitter; her maternal example encourages us to suffer and makes the road to Calvary easier. Let us go, then, with Mary, to join Jesus on Golgotha; let us go with her to meet our cross; and sustained by her, let us embrace it willingly, uniting it with her Son's. —Excerpted from Divine Intimacy, Fr. Gabriel of St. Mary Magdalen, O.C.D.
Find us on Social Media.