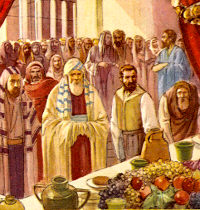 Almighty God, every good thing comes from you. Fill our hearts with love for you, increase our faith, and by your constant care protect the good you have given us. We ask this through our Lord Jesus Christ, your Son, who lives and reigns with you and the Holy Spirit, God, for ever and ever. Amen.

Then Jesus said to his disciples, "Whoever wishes to come after me must deny himself, take up his cross, and follow me. For whoever wishes to save his life will lose it, but whoever loses his life for my sake will find it. What profit would there be for one to gain the whole world and forfeit his life? Or what can one give in exchange for his life? For the Son of Man will come with his angels in his Father's glory, and then he will repay everyone according to his conduct. Amen, I say to you, there are some standing here who will not taste death until they see the Son of Man coming in his kingdom" (Matt. 16:24-28).