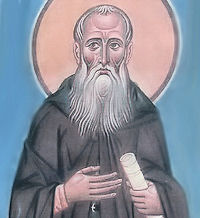 St. Arsenius
Arsenius was born to two rich parents in A.D. 350 in Rome. His father was a senator and judge. His parents were very righteous and honorable people. They sent Arsenius to the teachers of the Church and was raised in the fear of God. He was eager to read the Scriptures and the holy books, and was ordained a deacon then an arch-deacon by Saint Damasus the Bishop of Rome. 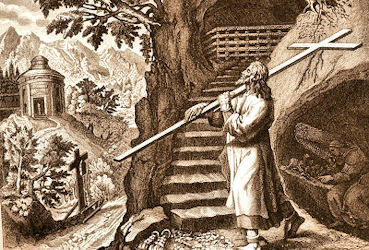 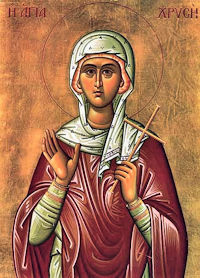 Soon Córdoba became the capital of this part of the original "Islamic State", and would remain so until the 15th century.During this whole period the Church continued to exist, but she was subject to sharia (Islamic law) which forbade public witness and imposed jizya (a special tax). Things became more complicated as Córdoba grew into a prestigious economic and cultural center in the Islamic world. Catholic churches and monasteries remained, but the population — attracted by the many opportunities in the Muslim city — began converting to Islam. Even prominent churchmen cooperated with the political regime in ways that compromised their integrity.By 800, few remained professing Catholics. A significant portion of the population, however, conformed externally to Islamic laws and customs but tried in various ways to remain Christian privately or even secretly. Though sharia law permitted Christians to exist, it forbade Muslims to convert to Christianity. This was regarded as the crime of apostasy, punishable by death.The problem of "secret Christians" in Islamic Spain was especially complicated by the inevitable mixed marriages between Muslim men and Christian women. The latter were generally permitted to retain their faith, but the children of such marriages were considered Muslim by sharia law. It is impossible to gauge the influence of these Christian mothers on their children, but it was not negligible.Thus, by the 9th century Córdoba was institutionally and legally Muslim and what was left of the Church was largely compliant. But this period also documents the witness of forty-eight Córdoba Martyrs. Many were Christians executed for blasphemy because, in seeking to reinvigorate the Church, they openly proclaimed Christ and denounced Islam.But there were also apostates among them. Saint Aurea illustrates what may have been the hidden truth for many others born of mixed marriages. She was one of several children of a prominent Muslim father and a Christian mother. Her mother must have been an outstanding woman of faith who raised her children as believing Christians. When Aurea was young, two of her brothers were martyred. Sometime after this (and after her marriage and widowhood, about which nothing is known) Aurea joined her mother in seclusion in a convent outside the city.A significant portion of the population, however, conformed externally to Islamic laws and customs but tried in various ways to remain Christian privately or even secretly.
Open Christian witness was met by further Muslim persecution in 850, and it became increasingly unsafe for Christians like Aurea, who were legally Muslim by birth in spite of growing up as Christians and personally embracing the Christian Faith. Relatives from her Muslim father's family found Aurea after twenty years of undisturbed peace in the convent and brought her before the sharia court. To avoid being condemned for apostasy, Aurea did what many other secret Christians did to escape: she declared adherence to Islam and its prophet. She repented, however, almost immediately after being released, and returned to practicing her Christian faith. Her Muslim relatives denounced her again, and this time she was executed on July 19, 856. We have presented Aurea as a convert even though its possible that she was baptized a Christian at an early age. Nevertheless, she was martyred because Islamic law regarded her as a convert — an apostate — simply because of her free adherence to Jesus Christ.Excerpted from John Janaro "Saint Aurea of Cordoba." Magnificat (April, 2016). 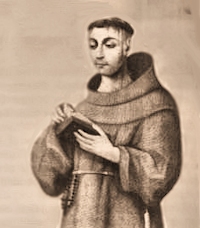 A contemporary of the American Revolution and of Blessed Junipero Serra, Francisco Garcés was born in 1738 in Spain, where he joined the Franciscans.

After ordination in 1763, he was sent to Mexico. Five years later he was assigned to San Xavier del Bac near Tucson, one of several missions the Jesuits had founded in Arizona and New Mexico before being expelled in 1767 from all territories controlled by the Catholic king of Spain. In Arizona, Francisco worked among the Papago, Yuma, Pima and Apache Native Americans. His missionary travels took him to the Grand Canyon and to California.Friar Francisco Palou, a contemporary, writes that Father Garcés was greatly loved by the indigenous peoples, among whom he lived unharmed for a long time. They regularly gave him food and referred to him as "Viva Jesus," which was the greeting he taught them to use.For the sake of their indigenous converts, the Spanish missionaries wanted to organize settlements away from the Spanish soldiers and colonists. But the commandant in Mexico insisted that two new missions on the Colorado River, Misión San Pedro y San Pablo and Misión La Purísima Concepción, be mixed settlements.A revolt among the Yumas against the Spanish left Friars Juan Diaz and Matias Moreno dead at Misión San Pedro y San Pablo. Friars Francisco Garcés and Juan Barreneche were killed at Misión La Purísima Concepción (the site of Fort Yuma).Excerpted from the Catholic News Agency
Find us on Social Media.