Lord, send the power of your Holy Spirit upon us that we may remain faithful and do your will in our daily lives. We ask this through our Lord Jesus Christ, your Son, who lives and reigns with you and the Holy Spirit, God, for ever and ever. Amen.

"'Simon son of John, do you love me more than these others do?' He answered, 'Yes Lord, you know I love you.'" "There cannot be a more sure means of pleasing Jesus, of manifesting to Him that absolute love which He alone merits, than in ever seeking 'with most fervent love' to do the will of His Father Who is also ours; in keeping united to Him, the Father's Beloved Son; and in striving to reproduce in ourselves the dispositions of reverence and love for His Father, of charity for our brethren, of humility and obedience which animated His blessed soul here below." — Christ the Ideal of the Monk, Dom Columba Marmion 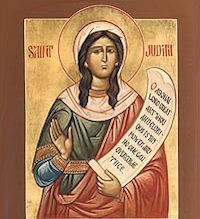 At that time Poland was over run by Tartars, Rutheni, and Lithuanians. They burnt Cracow, Sendomiria, and other cities, and twice within ten months choked up the river Vistula with Christian corpses. Prussia was devastated next. The Crucifers with difficulty saved their lives and liberties by taking refuge in the fortresses they held against the barbarians; while the natives who had but recently been baptized relapsed into paganism, joined the invaders, and massacred the priests and other Christians who dwelt among them. The aid the Christians sent for from Germany was long in coming. It pleased God that Prussia and the adjacent province of Masovia should at this time receive a special protector and patron from Germany, in the person of St. Jutta. She came to Prussia in 1260, to lead a solitary and austere life in its thick and dark forests, while Boleslaw the Chaste and St. Cunegund were reigning in Poland. She chose for her dwelling a ruined building, not far from Culm, near a great pond or marsh called Bielczna. The neighbors observed that she was sometimes lifted up from the earth and suspended in the air while she prayed, and that when she went to the new church at Culm, she sometimes went through the wood a long way round, by the edge of the lake, and sometimes she walked straight across the water by a path which could still be seen after her death. She lived in great sanctity in the forest for four years, and died in 1264. Her friend and confessor, Henry, bishop of Culuza, wanted to bury her quietly according to her own inclination, but he could not prevent an immense concourse of people assembling from the surrounding country, so that such a multitude had never been seen in Culuza before. Thirteen priests were present at the funeral, a great number at that time, when none but missionaries had settled there, and most of those had been massacred by the barbarians.She was buried in the Church of the Holy Trinity. Fifteen years afterwards, steps were taken for her canonization, in consequence of her great renown for sanctity and the numerous miracles wrought at her tomb.--Excerpted from A Dictionary of Saintly WomenPatron: Prussia