Lord, may this lenten observance of the suffering, death, and resurrection of Christ bring us to the full joy of Easter. We ask this through our Lord Jesus Christ, your Son, who lives and reigns with you and the Holy Spirit, God, for ever and ever. Amen.

The Station is in the church of St. Susanna, virgin and martyr of Rome. The reason this church was chosen is because the history of the chaste Susanna, the daughter of Helcias, was read today in the Tridentine Mass. Meditation- Mary's Acceptance of All, for Love of Us
Mary, there present as eyewitness to the sacred Passion of her divine Son on Good Friday, was destined to be present in spirit and maternal interest at future scenes in the unending tragedy of Christ Jesus' Passion in His members through all the Christian centuries. She was destined to be present precisely in that high office to which Jesus Himself would assign her at the foot of His cross on Calvary, as the Mother of all who live the divine life of the children of the Second Adam. Hence, to fit her for this office of Mediatrix who would have Christ-like compassion on all our human infirmities, she too must be tempted in all things as we are (without sin), that we might with confidence go to the throne of her mercy, there to obtain the precious grace of Christ-like obedience through her who herself learned perfect obedience by the things which she suffered with her divine Son. She also must be tested that, by her union with the very humiliation and suffering with which the Son purchased His title of High Priest, the Mother too might at the same time purchase her title — Mediatrix of all the graces to be dispensed from the treasury of the Sacred Heart of Him, who alone is in His own right the great High Priest, the universal and plenipotentiary Mediator of the New Testament.Mark well, therefore—it was on Good Friday, during these hours of darkness and shame and anguish which Mary shared with Jesus most intimately, that the Savior fountains of the Second Adam poured their tenderest mercifulness into the heart of the Second Eve so copiously, that until the Book of Life is filled the whole world might with unlimited filial confidence have recourse to Mary—

The Health of the sick,
The safe Refuge of sinners,
The sympathetic Comforter of the afflicted,
The unfailing Help of Christians 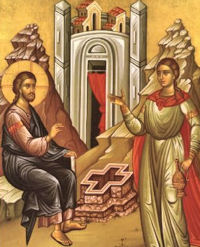