Unlocking the mystery of Our Lady of Guadalupe 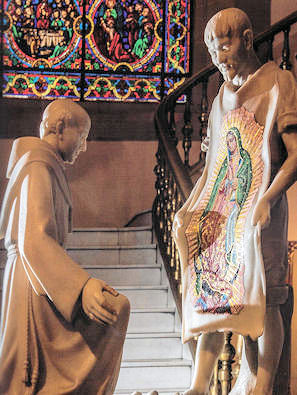 Earlier this year, Ignatius Press brought out an English edition of a remarkable coffee-table book entitled Guadalupe Mysteries: Deciphering the Code. Authored by film director Grszegorz Górny and photographer Janusz Rosikoń, the 280-page oversize hardback book is printed in full color on high-gloss paper, complete with photographs, paintings, maps and charts to supplement the text on every page.

Guadalupe Mysteries retells the history of Mary’s appearance to St. Juan Diego in 1531 in Mexico, the miraculous image she left on his tilma, the importance of Our Lady of Guadalupe to the conversion of Mexico, and the extraordinary details of the image which continue to provide irrefutable evidence of its supernatural origin.

This beautiful book is divided into eight sections which cover the following information in detail:

If you don’t know the story behind Mary’s apparition as Our Lady of Guadalupe, this book provides an excellent presentation of the background, the horrors of Aztec religion, the efforts of the Spanish, the critical intervention of Our Lady, and the immediate results. It also demonstrates the importance of Our Lady of Guadalupe throughout the rest of Mexico’s history, as deeply committed Catholics strive to live their Faith despite the disadvantages imposed on it by the ruling class. 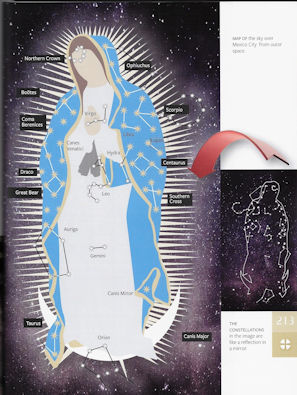 But the best part of the book is the final three chapters, which provide the immense evidence that the tilma of the poor Indian on which Mary imprinted her special image is, in reality, a continuing miracle even in our own time. Fresh discoveries of the wonders contained in the image have been made more or less continuously from the 1600s into the 2000s, and an institute of scholars continues to study the image today, using ever-improving techniques.

Here we have a piece of old cloth with an image which shows the exact location of the major star patterns over the episcopal office in Mexico at the precise moment when Juan Diego showed his tilma to his bishop. We have an image which contains numerous pictographs, a means of communication used by the Indians in those days, which they understood how to interpret—along with intensive Christian elements. We have an image with decorative elements which match the locations of the major landmarks of Mexico, when overlaid by a highly-accurate modern map.

This is a naturally beautiful book which makes a stunning supernatural gift.