Early this week we wrapped up an informal survey in which we asked Catholic Culture readers about their perception of the controversy involving Father Pavone and Priests for Life. Among the readers who responded: 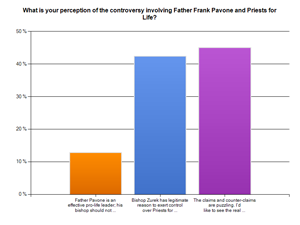 The survey—which is not intended to be a scientific sampling—suggests that most of our readers are not persuaded by the complaints that Bishop Zurek acted arbitrarily when he called Father Pavone back to the Amarillo diocese. While some pro-life activists charge that the bishop is trying to stifle an outspoken opponent of abortion, 42.3% of our readers think that the bishop has good reason for his concern about the leadership of Priests for Life, and another 45% are open to that possibility.

If Father Pavone is involved in a showdown with his bishop, it is significant that only about one-eighth of our readers are prepared to line up on his side. That result is particularly noteworthy, I think, because I feel confident that any survey on the abortion issue would show an overwhelming support for the pro-life position among Catholic Culture readers. (Maybe that will be a topic for another future survey!)

For more on the Pavone controversy, see:

This week we’ve inaugurated a new informal survey , asking what readers whether they see the “Arab Spring” uprisings as a positive development in the Middle East or an unfortunate opportunity for radical Islam. Have you entered your opinion?