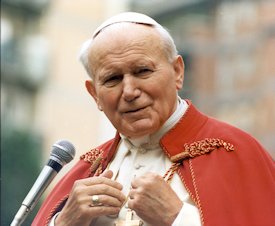 In honor of the feast of St. John Paul II, this is a repost from October 2014 archives:

Recently my husband and I watched The Roosevelts: An Intimate History by Ken Burns. When the film reached Franklin Delano Roosevelt dying after serving as president of the United States for 12 years, there was a comment that many people couldn’t remember having another president. I have been thinking how this is how I felt when Pope John Paul II died, after he reigned as pope for 25 years (1978-2005). I was eleven at the time of his election, so I can say I “grew up” with John Paul II.

This is the first year of celebrating John Paul II as a canonized saint in heaven. His feast day is an optional memorial for the General Roman Calendar for the universal Church. One of my family’s focal points during the liturgical year is reading and discussing the saint of the day. It can get frustrating at times, since often we only find a short biography, usually just one paragraph, describing the saint. It seems the more distant in history we are to a saint’s life, the less details and information we have. My boys always want more information; they want to know about the person. A short biography doesn’t really capture a person. Highlighting the accomplishments of a life is one-dimensional and more like a résumé than a biography. My sons want to visualize the flesh and blood person; they want childhood stories and anecdotes that make the saint come alive in their minds.

There is no disputing that St. John Paul II’s life’s work is vast, which makes it harder to really fully describe his life. I do find that when we discuss the saints at home, what touches the heart most is the personal connections. I lived during the papacy of John Paul II. He was my Holy Father for 25 years. Like a father he made a great impact on my life, which continues and grows to this day. This is how I will relate this saint to my sons: sharing my Holy Father’s story through my eyes. I was able to see him in person four times, twice in Rome. I’m passing orally how he influenced me. So for this first year as canonized St. John Paul II, I am recalling ten main areas of impact St. John Paul II had on my life.

And above all this, I treasure his first words after his election, “Be Not Afraid!” Those words summarize his entire life, and call us to do the same!

St. John Paul is nicknamed “the Great” because he did so much! It was difficult to just narrow my list to only 10 items. I won’t be covering all these points at one time, but a few stories and personal reflections can perhaps ignite a love for this saint to my sons so that they can imitate John Paul, read his works, reflect on the impact he has made (unknowingly) on their lives, and turn to this new saint in heaven for intercession. St. John Paul II, pray for us!