Holy Thursday Mandatum: Love One Another 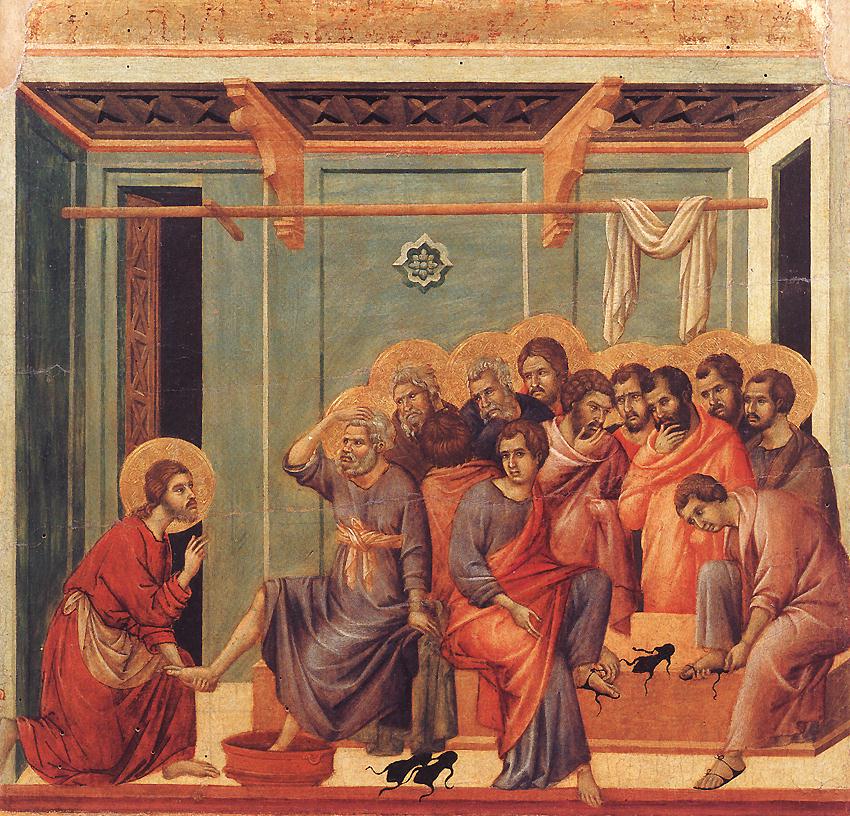 So when he had washed their feet and put his garments back on and reclined at table again, he said to them, “Do you realize what I have done for you? You call me ‘teacher’ and ‘master,’ and rightly so, for indeed I am. If I, therefore, the master and teacher, have washed your feet, you ought to wash one another’s feet. I have given you a model to follow, so that as I have done for you, you should also do.” Holy Thursday - Evening Mass of the Lord’s Supper, Gospel Jn 13:1-15

While Holy Thursday emphasizes the institution of the Holy Eucharist and Holy Orders, another aspect of this Mass is the Washing of feet. In many parts of the world this day is referred to as Maundy Thursday, derived from the first Latin word of John 13:34: Mandatum novum do vobis ut diligatis invicem sicut dilexi vos: I give you a new commandment: love one another. As I have loved you, so you also should love one another.” Jesus explains His washing of the apostles’ feet with the Mandatum.

I mentioned last week in my Holy Week Preparation that our family has practiced washing the feet of family members for many years. We usually practice this on Holy Thursday before the Mass, but sometimes on another day of Holy Week. I always strive to understand WHY we do such traditions, and reevaluate their usefulness and teaching ability. Is it just for traditions’s sake or does it have a richer, deeper meaning? And am I passing on that deeper meaning to my family?

Adolf Adam in The Liturgical Year explains the significance of this biblical action of Christ (emphasis mine). We hear 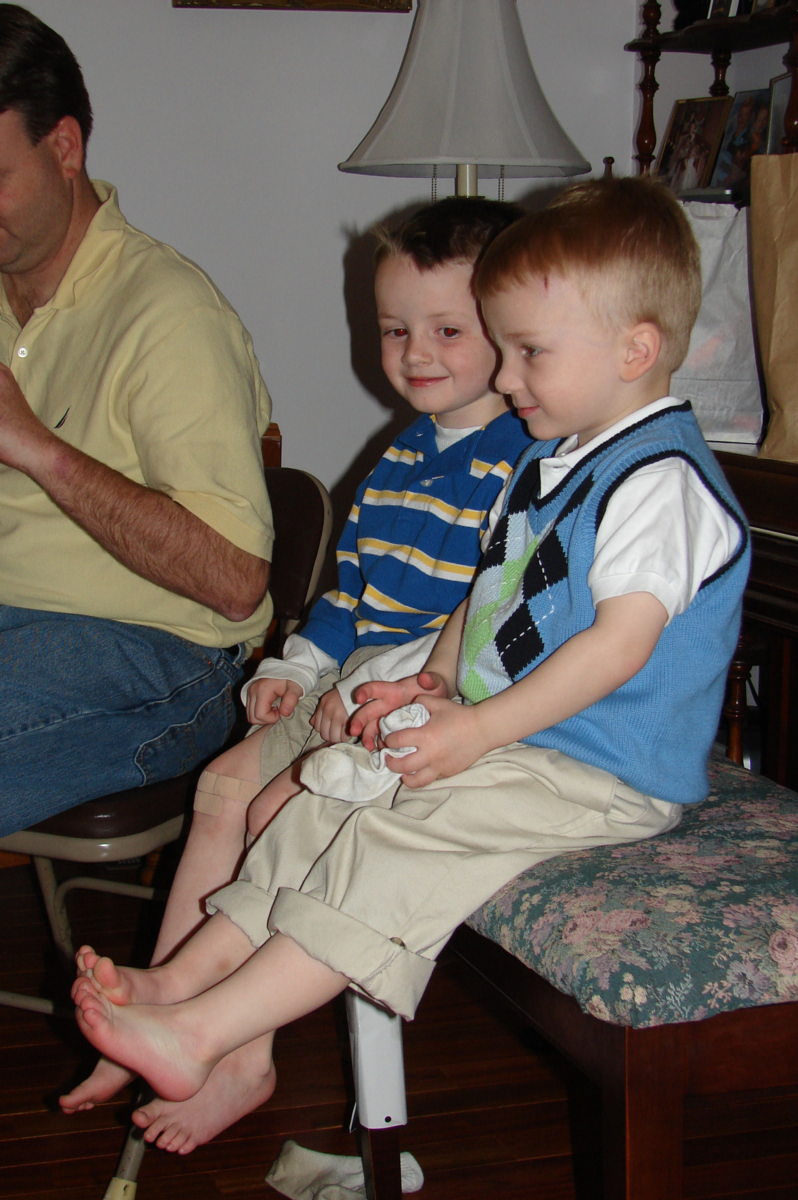 ...the gospel of the washing of feet proclaiming the “new commandment”: “Love one another as I have loved you” (John 13:24). The gospel pericope, John 13:1-15, tells us of the interior attitude of Jesus: his purpose is to serve, not to dominate. The washing of the disciples’ feet, usually something done for guests by slaves, becomes a clear sign of the fact that Jesus loves the human race without limit, even to the point of sacrificing himself in death on the cross.

The Lord’s admonition at the end of this passage cannot be missed: “If I then, your Lord and Teacher, have washed your feet, you also ought to wash one another’s feet. For I have given you an example, that you also should do as I have done to you.” This instruction of the Lord and the phrase “new commandment (mandatum)” led to speaking of the washing of the feet as the Mandatum. The important thing, of course, is the love that lies behind the symbolic washing of feet and the manifold expression of this love in manifold service to the brethren. But the Church has never lost sight of the concrete biblical sign the Lord had used in expressing his love (The Liturgical Year by Adolf Adam, pp. 66-67).

Father Francis Weiser in The Easter Book shares the historical background of the Mandatum (again, emphasis mine):

Finally, there is the ancient rite of the Mandatum, the washing of the feet. It is prescribed by the rules of the Roman Missal as follows:

After the altars are denuded, the clergy shall meet at a convenient hour for the Mandatum. The Gospel Ante diem festum (John 13, 1-17) is sung by the Deacon. After the Gospel the prelate puts off his cope and, fastening a towel around him, he kneels before each one of those who are chosen for the ceremony, washes, wipes and kisses the right foot.”

From ancient times, all religious superiors, bishops, abbots, and prelates, performed the Maundy; so did the popes at all times. As early as 694 the Synod of Toledo prescribed the rite. Religious superiors of monasteries washed the feet of those subject to them, while the popes and bishops performed the ceremony on a number of clergy or laymen (usually twelve). In medieval times, and in some countries up to the present century, Christian emperors, kings, and lords washed the feet of old and poor men whom they afterwards served at a meal and provided with appropriate alms.

In England, the kings used to wash the feet of as many men as they themselves were years old. After the Reformation, Queen Elizabeth I still adhered to the pious tradition; she is reported to have used a silver bowl of water scented with perfume when she washed the feet of poor women on Maundy Thursday. Today, all that is left of this custom in England is a distribution of silver coins by royal officials to as many poor persons as the monarch is years old.

In the Latin countries the washing of feet is still kept in many parish churches, where the pastor performs it on twelve old men or twelve boys. In Mexico and other sections of South America the Last Supper is often re-enacted in church, with the priest presiding and twelve men or boys, dressed as apostles, speaking the dialogue as recorded in the Gospels. In Malta, a “Last Supper Table” is richly laden by the faithful with food that is later distributed to the poor. 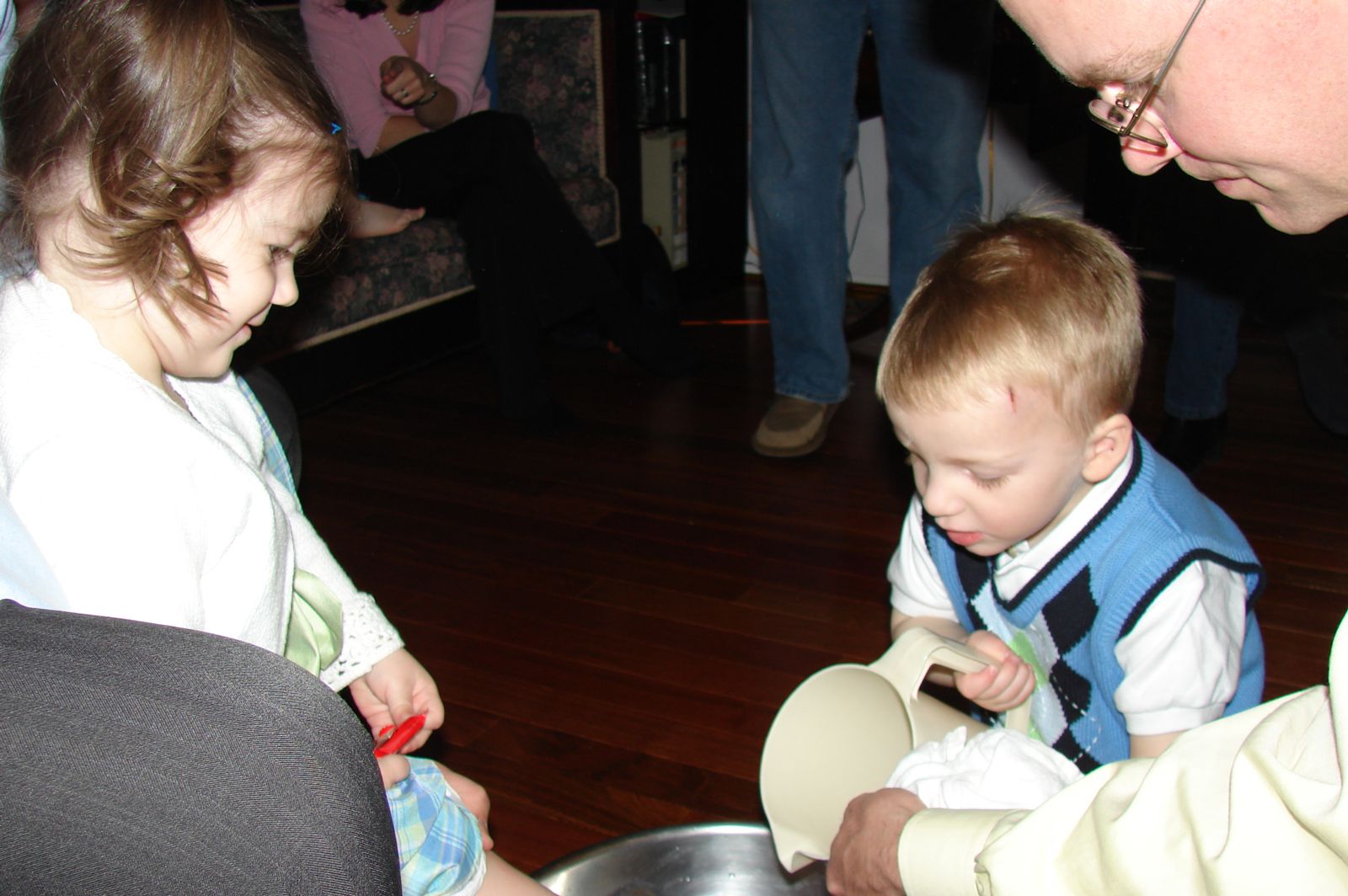 I found it interesting that this washing of feet was repeated by religious superiors. As the family is sometimes referred to as “the domestic monastery” it seems logical to repeat these actions within the home.

While the Mandatum is part of the Liturgy of Holy Thursday, even the instructions from 1955 explain what this should mean for the laity (emphasis mine):

Where the washing of feet, to show the Lord’s commandment about fraternal charity, is performed in a Church according to the rubrics of the restored Ordo of Holy Week, the faithful should be instructed on the profound meaning of this sacred rite and should be taught that it is only proper that they should abound in works of Christian charity on this day (Sacred Congregation of Rites, Instruction on the Correct Use of the Restored Ordo of Holy Week, November 16, 1955).

Usually on Holy Thursday before the Mass and our dinner meal, our family gathers for the Washing of the Feet. The initial reaction is like Peter’s, “You shall never wash my feet!” (John 13:8) If we remember the King of Kings, the Son of God knelt before sinful men to wash their very dirty feet (they wore sandals, and there was no carpeting or pavement in that time), how could we put ourselves up as better than the Son of God? Jesus took on the role of Servant, and taught his disciples that they must be also be servants, becoming humble and being charitable to others.

All that is required is a bowl, a pitcher of water and a towel (a separate one for each person). While reading aloud the account from the Gospel of John 13:1-17, we imitate Christ by washing the feet of the family members. We have everyone take turns, instead of the head of the family doing all the feet. It starts with the father washing the mother’s feet (or when extended family joins together, the grandfather), the mother washing the eldest child’s feet and so on until the youngest child washes the father’s feet. We even have the babies involved, with help of course. Although Christ probably had to scrub, just a little bit of water (even on just one foot) will suffice. 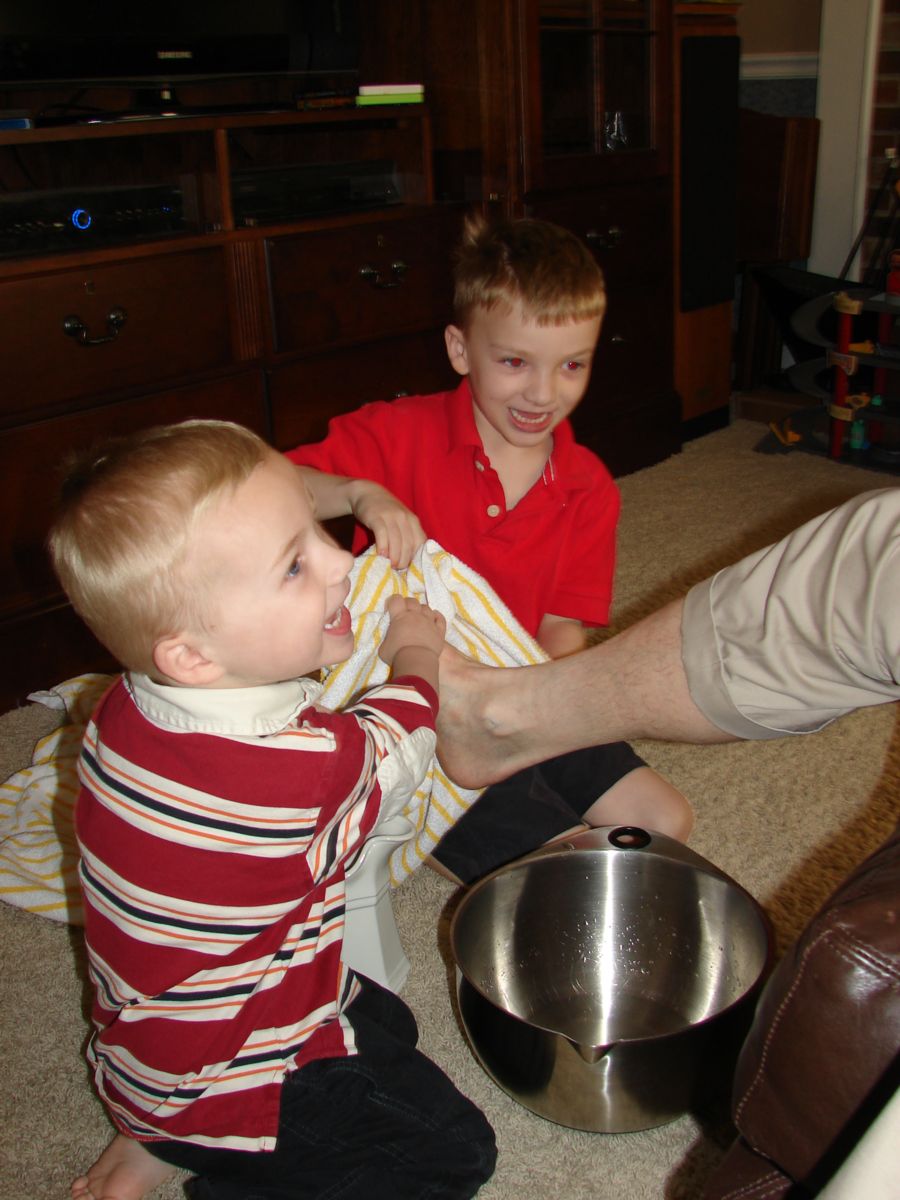 We do not require this to be a solemn ceremony. The children are themselves. There are giggles and jokes, but they are usually very patient for their turn. At times there are little ones who do not want to participate, and we do not force them.

This act of humility is a sign of the sacrament of penance; it shows repentance and forgiveness, and of rebirth in grace. This activity brings home the teaching of humility and charity when we later witness the Washing of the Feet at the Mass of the Lord’s Supper. This should begin a discussion on how this imitation of Christ was a little act of humility and charity with members of our family. Christ has given the commandment to love one another as He loves us. Each of us should now make resolutions to show for others in specific actions of charity throughout the year.

Emerson and Arleen Hynes in Lent and Holy Week in the Home (1977, The Liturgical Press), give examples of the mandatum in family life:

[Holy Thursday] is the day of fraternal charity, and charity truly begins at home. The parents will take the lead in setting the example for this day. Every act will be more considerate, Our voices will be moderated out of respect for one another. We show an extra willingness to give way to one another. We pass up opportunities for argument and criticism. We meditate on the truth that this is the day to commemorate the institution of the Eucharist, and we feel the excitement of the anniversary of a great event.

On this day our Lord washed the feet of His disciples, explaining his action by saying: “If I your Lord and Master have washed your feet, how much more ought you to wash one another’s feet” (John 13:14). Parents, indeed, have had the “mandatum” many times daily for their children when they were babies and needed daily scrubbings. Still, Holy Thursday is the day on which the father, as the symbol of Christ in the home (“Husbands, love your wives as Christ also loved the Church”), should perform some symbolic act of humility. 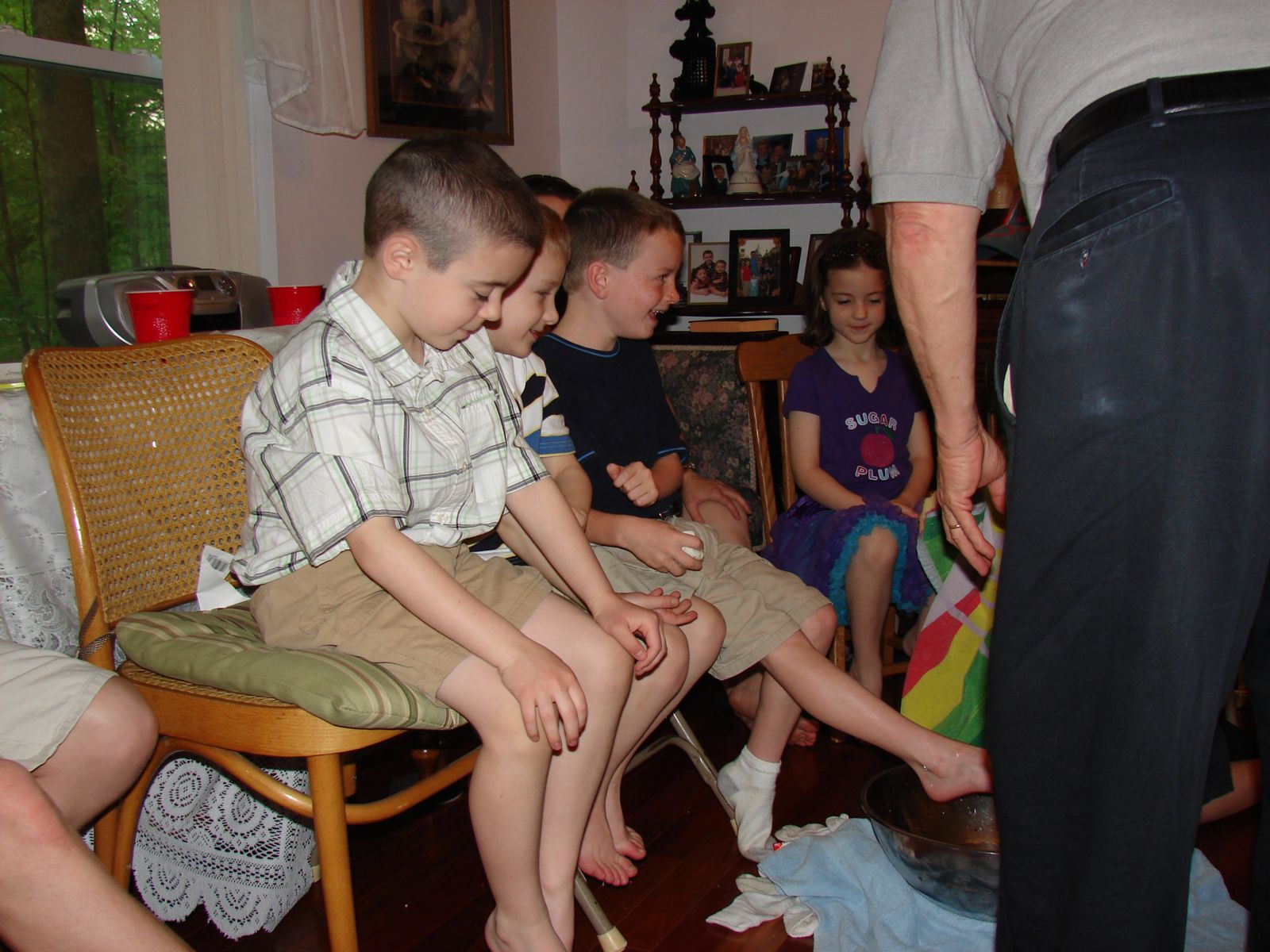 In our domestic church, I need to learn and live this fraternal charity. I can perform the actual act of washing feet, but I need to make sure that it is a sign of deeper love for my family and following Christ’s commandment to “Love one another as I have loved you.”

And as at the Mass of the Lord’s Supper, our foot washing includes singing “Ubi Caritas“ or “Where Charity and Love Prevail“. We sang the latter quite often growing up, as my mother was always stressing charity with our siblings and others.

This is a tradition that is anticipated by the children. I have also notice that at the evening Mass the children are extremely silent witnessing the Mandatum, recalling the words of the Gospel and how it felt when they washed feet. Pius Parsch in his Holy Thursday reflections from The Church’s Year of Grace shares that

[t]he Mass of Holy Thursday has a very special significance as the memorial of the Last Supper. There is something very touching and moving about this service. Tonight, if ever, we should take an active part in the great drama and not rest content as mere spectators. We should regard ourselves as disciples gathered about the Master in the Upper Room, a Master who serves us, speaks consolingly to us and feeds us with His own Body and Blood (p. 325).

And that is what we are striving to help our children with this tradition.