Have you ever had too much good news?

How much good news can a family absorb in the space of two weeks? The Lawler family has been testing the limits. I hope you won’t mind if I share the “burden.”

It all began at the beginning of August, when our son-in-law returned from Afghanistan. Lt. Philip Turner had finished his deployment and brought his entire platoon of Marines home safely. Our daughter Rosie—who, as you might imagine, was mighty happy to see her Philip again— described the homecoming here. (Warning: If you are at all susceptible, have tissues handy.) But really, the picture below tells the story by itself. 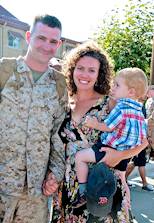 Look at those faces! Philip looks tired, but relieved and very happy. He has a good strong grip on Rosie’s hand; it doesn’t look as if he plans to let go any time soon. Rosie? I know that face. If human beings could explode from happiness, she would. And little Pippo’s* face is the most interesting of all. It’s mostly awe, looking at the big guy. But there’s just a hint of uncertainty, too. “Wait; does this mean I don’t have Mom to myself any more?” Get used to it, kiddo.

(* In case you were wondering, Pippo’s real name is Philip. We’re generally economical about names in this family. Although... Well, I'm getting to that.) 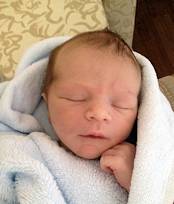 This past weekend was bound to be a good one, because I was celebrating the 33rd anniversary of my greatest personal triumph: persuading Leila to marry me. But on the eve of our anniversary, we had a phone call that made things even better. Our son Nick was calling from Hong Kong—where, by the way, it was already August 11—to announce that his terrific wife Natasha had just delivered Francis Xavier Frederick Lawler.

Another safe homecoming! Could you top that as an anniversary gift? Nope.

Still the run of good news wasn’t over. Today I had another phone call, this time from the doctor. He told me that the prostate biopsy I’d undergone last week came back negative: no sign of cancer. To properly appreciate that message, you must understand that two years ago, the same doctor had delivered a quite different message.

As you may know, prostate cancer develops very slowly. Having discovered a small amount of cancerous tissue in 2010, the doctors couldn’t be sure whether they had caught an aggressive cancer in its earliest stages, or whether I had what is known as an “indolent” cancer, which is likely never to produce symptoms or require treatment. Now we know.

So right now I have more good news than I can manage. Could you help me out with it? We all often ask friends to help us with prayers when we are in need. Could you help me now with a prayer of thanksgiving? I can't get it done by myself.