Late last week I had an unusual experience. I found myself getting impossibly angry over the situation in Charlotte, North Carolina, about which I had written twice and Phil Lawler once (see list of essays at the end). I realized I was experiencing an unpredictable emotional reaction which was not what I should be feeling. If (as I believe) there was a destructive mob mentality at work in Charlotte, then the proper Christian response did not include letting a mob mentality into my own head. I could almost feel myself deteriorating into a mob of one.

After so many battles, I was surprised by this reaction. I asked Phil if he had experienced anything similar, and he replied that this particular incident had been essentially business as usual for him, which is what it should have been for me. Then he said something that I found wise: “I think that’s the way it is with emotions sometimes; they just creep up on you.” The reason was not really in the situation; it was somewhere in my delicate little psyche. It was, perhaps in a deeper sense, somewhere in my own soul. Its recognition became yet another bit of unflattering self-knowledge.

So what do you do when you find yourself emotionally over-extended in this way? To me, it was a signal to step back and avoid writing any further about this incident, as I could not trust my own objectivity. This professional response also made room for the necessary personal response: Disengage, take a breath, pray, relax, and shift attention to something less volatile. That’s exactly what I did.

Yesterday I was occupied primarily with management and financial issues. I wrote only a tiny City Gates piece, As the family goes, so goes the nation—or, indeed, so goes Charlotte. Everything is, after all, connected. But it gave me a break. I also need to refuel by reading a few new books, stocking up on ideas and insights which will make it possible to bring fresh perspectives to the issues we all face in the Church and the world.

But by today I was looking for a more substantive topics, and nothing came immediately to mind. Usually when I’m dry, I’ll wander around the house (my office is at home) saying the Rosary and seeing what thoughts bubble up. (As my readers must know by now, everything I write is directly informed and inspired by the Holy Spirit….) As it turns out, our home has a feature that I find indispensable in house design. There is a route you can follow through the entire living area that takes you around in a circle. This fits my pacing personality perfectly. Today I noticed, again, that on each circuit I was passing a pair of paintings on the wall which depict an episode in the life of a young red-headed boy. This is not about me, or maybe it is, but a long time ago, I too was a young red-headed boy.

The pair of paintings was done perhaps ten to fifteen years ago by an artist named Steven De Lacy, originally executed as a front and back cover for This Rock magazine (now Catholic Answers magazine). They are very definitely in the style made famous by Norman Rockwell, especially in the Saturday Evening Post. I was one of several people who suggested to Karl Keating of Catholic Answers that he make prints and sell them to readers. He did, and of course I bought a pair for myself. Not too long ago, in the course of some minor shifting among too many pictures in a smallish house, these went back up on the wall.

The first print shows a side view of a young boy flying high on a swing. You can see a rosary dangling out of his right back pocket. But a black crow has grabbed the Rosary in its beak, and is in the process of stealing it. The boy’s face communicates his awareness and outrage. 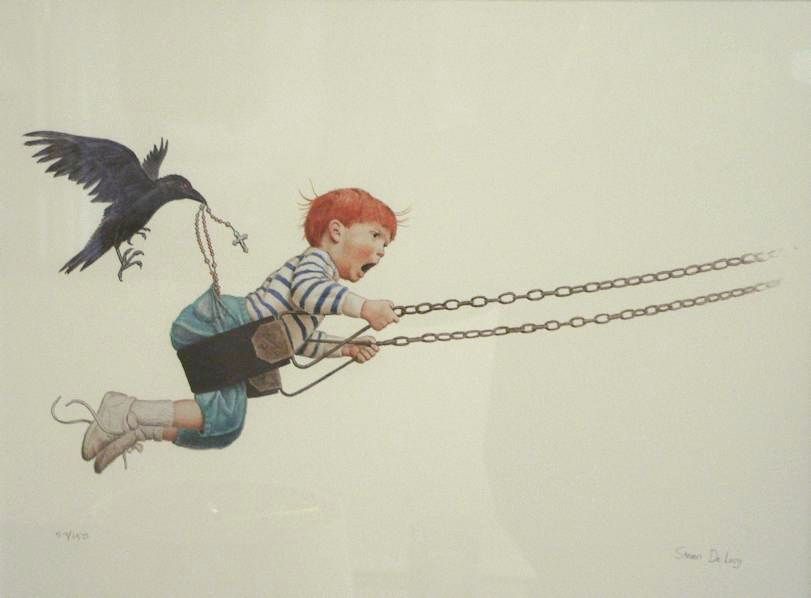 The second print shows the back of the boy sitting on a rock. He is reading a book, perhaps the Bible. His Rosary is back where it belongs, and a lone black crow’s feather litters the ground behind him. Then we notice his left back pocket for the first time. It holds a slingshot. 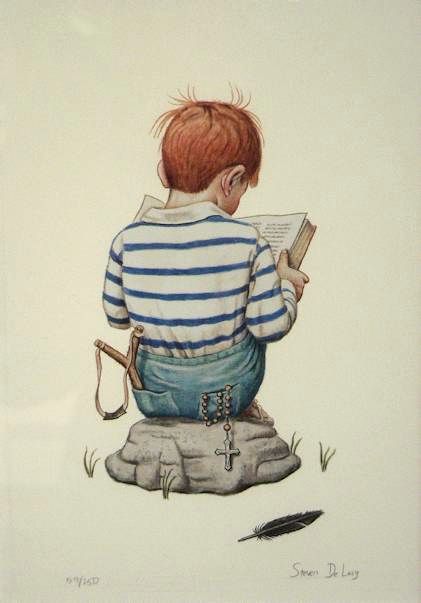 Life is not this simple in every respect, of course. Often we do not see the Devil fall. But the parable is clear.

You pray. You take your best shot. And you relax by trusting God.

Three commentaries on the recent controversy at the Catholic high school in Charlotte, North Carolina, during which I found myself overtaken by uncharacteristic anger: