Monday of the Second Week of Advent 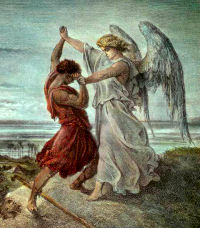 Monday of the Second Week of Advent: May our prayer of petition rise before you, we pray, O Lord, that, with purity unblemished, we, your servants, may come, as we desire, to celebrate the great mystery of the Incarnation of your Only Begotten Son. Who lives and reigns with you in the unity of the Holy Spirit, God, for ever and ever.

Hear the word of the Lord, O nations; declare it to the distant lands: Behold, our Savior will come; you need no longer fear.

Behold the king will come, the Lord of the earth, and he himself will lift the yoke of our captivity.

Come, O Lord, visit us in peace, that we may rejoice before you with a blameless heart.

Today the Roman Martyrology commemorates St. Sabbas (439-532), an anchorite who dedicated his life to prayer and manual labor. He is pictured as an abbot with an apple, as he was once tempted to eat an apple outside of the prescribed mealtime, whereupon he vowed never to eat apples again. In Jerusalem he built a famous laura (as oriental monasteries are called), which bears his name. When the Arabs later conquered the Holy City, the monks fled to Rome, where they built a monastery and introduced the veneration of their saint. In the Eastern Church St. Sabbas ranks high in popular devotion; he is distinguished by the titles "God-bearer, the Saint, Citizen of the Holy City, Star of the Desert, Patriarch of Monks."

Saint Sabbas the Sanctified was born in the fifth century in Cappadocia, in the pious Christian family of John and Sophia. His father was a military commander. Journeying to Alexandria on military matters, his wife went with him, but they left their five-year-old son in the care of an uncle. When the boy reached eight years of age, he entered the monastery of St. Flavian, located nearby. The gifted child quickly learned to read and became an expert on the Holy Scriptures. In vain did his parents urge St. Sabbas to return to the world and enter into marriage. At seventeen years of age he received monastic tonsure, and attained such perfection in fasting and prayer that he was given the gift of wonderworking. After spending ten years at the monastery of St. Flavian, he went to other monasteries. St. Sabbas lived in obedience at this monastery until the age of thirty.

He was later blessed to seclude himself in a cave. On Saturdays, however, he left his hermitage and came to the monastery, where he participated in divine services and ate with the brethren. After a certain time St. Sabbas received permission not to leave his hermitage at all, and he struggled in the cave for five years. After several years, disciples began to gather around St. Sabbas, seeking the monastic life. As the number of monks increased, a lavra sprang up. When a pillar of fire appeared before St. Sabbas as he was walking, he found a spacious cave in the form of a church.St. Sabbas founded several more monasteries. Many miracles took place through the prayers of St. Sabbas: at the Lavra a spring of water welled up, during a time of drought there was abundant rain, and there were also healings of the sick and the demoniacs. The saint surrendered his soul to God in the year 532.Symbols and Representation: Abbot with an apple; man holding the rule of his monastery in his hand; man seated at the edge of a cliff; man praying in a cave with a lion nearbyHighlights and Things to Do:
Find us on Social Media.