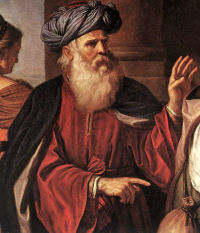 Thursday of the First Week of Advent: Stir up your power, O Lord, and come to our help with mighty strength, that what our sins impede the grace of your mercy may hasten. Through our Lord Jesus Christ, your Son, who lives and reigns with you in the unity of the Holy Spirit, God, for ever and ever.

You, O Lord, are close, and all your ways are truth. From of old I have known of your decrees, for you are eternal.

Seek the Lord while he may be found; call him while he is near.

Let us live justly and devoutly in this age, as we await the blessed hope and the coming of the glory fo our great God.

The Roman Martyrology commemorates today the St. Charles Eugène de Foucauld (1858-1916), a French Catholic religious and priest, who lived among the Tuareg in the Sahara in Algeria. He was assassinated in 1916 outside the door of the fort he built for the protection of the Tuareg, and is a martyr. His inspiration and writings led to the founding of the Little Brothers of Jesus among other religious congregations. He was beatified on November 13, 2005 by Pope Benedict XVI, and canonized by Pope Francis on May 15, 2022.

Also commemorated is St. Eligius, French priest and bishop of Noyon and Tournai, who died in 660 AD.

A pilgrimage to the Holy Land revealed his vocation to him: to follow Jesus in his life at Nazareth. He spent 7 years as a Trappist, first in France and then at Akbès in Syria. Later he began to lead a life of prayer and adoration, alone, near a convent of Poor Clares in Nazareth.Ordained a priest at 43 (1901) he left for the Sahara, living at first in Beni Abbès and later at Tamanrasset among the Tuaregs of the Hoggar. He wanted to be among those who were, “the furthest removed, the most abandoned.” He wanted all who drew close to him to find in him a brother, “a universal brother.” In a great respect for the culture and faith of those among whom he lived, his desire was to “shout the Gospel with his life”. “I would like to be sufficiently good that people would say, “If such is the servant, what must the Master be like?”On the evening of December 1, 1916, he was killed by a band of marauders who had encircled his house.He had always dreamed of sharing his vocation with others: after having written several rules for religious life, he came to the conclusion that this “life of Nazareth” could be led by all. Today the “spiritual family of Charles de Foucauld” encompasses several associations of the faithful, religious communities and secular institutes for both lay people and priests.—Excerpted from the Libreria Editrice Vaticana Highlights and Things To Do:

On entering the court he fortified himself against its seductions by many austerities and continual ejaculatory prayers. He had a marvellous zeal for the redemption of captives, and for their deliverance would sell his jewels, his food, his clothes, and his very shoes, once by his prayers breaking their chains and opening their prisons. His great delight was in making rich shrines for relics.His striking virtue caused him, a layman and a goldsmith, to be made Bishop of Noyon, and his sanctity in this holy office was remarkable. He possessed the gifts of miracles and prophecy, and died in 665. —Excerpted from Lives of the Saints, by Alban Butler, Benziger Bros. ed. [1894] Patron: against boils; against epidemics; against equine diseases; against poverty; against ulcers; agricultural workers; basket makers; blacksmiths; boilermakers; cab drivers; candle makers; carpenters; carriage makers; cartwrights; clock makers; coachmen; computer scientists; craftsmen; cutlers; electricians; engravers; farmers; farriers; gilders; goldsmiths; guards; gunsmiths; harness makers; horse traders; jewelers; jockeys; knife makers; laborers; lamp makers; livestock; locksmiths; mechanics; metalsmiths; miners; minters; numismatics; Royal Electrical and Mechanical Engineers; saddle makers; scissors grinders; security guards; servants; silversmiths; tinsmiths; tool makers; veterinarians; watch makers; wheelwrights; Worshipful Company of Blacksmiths; coin collectors; garages; gas stations; horses; livestock; metal collectors; numismatists; peasants; petrol stations; precious metal collectors; sick horses; Eloois-Vijve, Belgium; Sint-Eloois-Winkel, Belgium; Carrozzieri, Italy; Schinveld, Netherlands (from CatholicSaints.info)Symbols and Represented As: anvil; hammer; horseshoe; pincers
bishop with a crosier and miniature church of chased gold; bishop with a hammer, anvil, and horseshoe; bishop with a horse; courtier; goldsmith; man grasping a devil‘s nose with pincers; man holding a chalice and goldsmith‘s hammer; man holding a horse‘s leg, which he detached from the horse in order to shoe it more easily; man shoeing a horse; man with hammer and crown near a smithy; man with hammer, anvil, and Saint Anthony; with Saint Godebertha of Noyon; giving a ring to Saint Godebertha (from CatholicSaints.info)
Highlights and Things To Do:
Find us on Social Media.