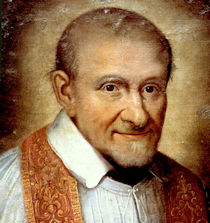 Memorial of St. Vincent de Paul: O God, who for the relief of the poor and the formation of the clergy endowed the Priest Saint Vincent de Paul with apostolic virtues, grant, we pray, that, afire with that same spirit, we may love what he loved and put into practice what he taught. Through our Lord Jesus Christ, your Son, who lives and reigns with you in the unity of the Holy Spirit, God, for ever and ever.

The Spirit of the Lord is upon me, for he has anointed me and sent me to preach the good news to the poor, to heal the broken-hearted.

I am the good shepherd, says the Lord; I know my sheep, and mine know me.

Let them thank the Lord for his mercy, his wonders for the children of men, for he satisfies the thirsty soul, and the hungry he fills with good things.

St. Vincent de Paul (1581-1660) was born in Gascony, France, and died in Paris. He studied theology at Toulouse and was ordained a priest in 1600. As a young priest he fell into the hands of Mohammedan pirates who carried him off to Africa. After his return to France he became successively parish priest, grand almoner of the galley slaves, and spiritual director of the Visitation nuns. He founded the Congregation of the Priests of the Mission or Lazarists to preach especially to country people. With the help of Louise de Marillac he established the Congregation of the Sisters of Charity to care for young girls, for the needy, sick, and foundlings. He died at St. Lazarus's which was the center of his Congregation. Leo XIII proclaimed him special patron of charitable institutions. 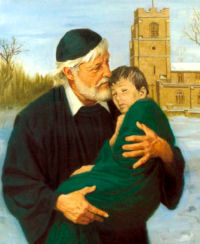