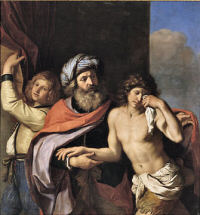 Twenty-Fourth Sunday in Ordinary Time: Look upon us, O God, Creator and ruler of all things, and, that we may feel the working of your mercy, grant that we may serve you With all our heart. Through our Lord Jesus Christ, your Son, who lives and reigns with you in the unity of the Holy Spirit, God, for ever and ever.

Give peace, O Lord, to those who wait for you, that your prophets be found true. Hear the prayers of your servant, and of your people Israel.

God was reconciling the world to himself in Christ and entrusting to us the message of reconciliation.

The chalice of blessing that we bless is a communion in the Blood of Christ; and the bread that we break is a sharing in the Body of the Lord.

Sunday Readings, Year C:
The First Reading is taken from the Book of Exodus 32:7-11, 13-14. During the forty days that Moses spent on top of Mt. Sinai receiving the Ten Commandments the people melted their gold and made a small effigy of the Egyptian bull, a golden calf. They declared this to be their god who brought them out of Egypt. They had returned to paganism and idolatry. God decided to punish them, but because of the intercession of Moses He stayed His hand and forgave them.

The Second Reading is from the First Letter of St. Paul to Timothy 1:12-17. The Apostle wrote two letters to Timothy, advising and encouraging him to continue his great work for Christ. This First Epistle was written in 65 or 66 A.D. from Macedonia. St. Paul spent his Christian life regretting his sinful past and wondering at the infinite mercy of Christ, the Son of God, who not only forgave all his past sins but showered His graces on him so abundantly. He realized that his past crimes against Christ, whom he judged as an impostor who was perverting the Chosen People of God, and also his persecution of the Jewish converts to Christ, were caused by his own pride. Yet he blames himself for the ignorance which caused this pharisaical pride in him, while Christ on the other hand excused him because of this ignorance. The conclusion he rightly draws from this is that there is no sinner so wicked but can be forgiven, and will be forgiven, if only he listens to the call of Christ.The Gospel is from St. Luke 15:1-32. The lesson that these stories, made up by our Lord himself, has for us is clearly a lesson of hope and confidence in the infinite mercy of God in His dealings with us. We are all sinners in one way or another. We have all gone astray, got lost like the sheep and the coin in those stories, sometime or other. What is worse, we are all capable of going astray from God again at any moment. If we had only the justice of God to deal with we might well despair, our chances of reaching heaven would be slight indeed.We are dealing, however, with a God of infinite mercy, who loves us with a love we cannot grasp or understand. All this infinite mercy of God is there for our benefit as long as we have the breath of life in us in this world. The whole of the Old Testament is full of examples and proofs of this mercy of God for man. It is in the New Testament, however, which begins with that almost incredible act of divine mercy, the Incarnation, that the infinite mercy of God for all mankind is seen in its fullness. The coming of the Son of God on earth in our human nature, His teaching, His sufferings and death, His resurrection were all accomplished for us, so that we could rise glorious from the dead and share the joys of heaven, to which we have no claim whatever, except the merciful goodness and generosity of God.God does not need us to make his existence happy. He is all-powerful, all-perfect, all-happy in himself. Because He is a God of love, a God of infinite generosity, He wants to give us a share in His happiness. At times one must wonder how any man who knows of God's generosity and of what that generosity has led Him to do for us, could ever think of abandoning that loving God, or get lost in futile earthly folly. Yet that does happen when we sin grievously.God does not cast us out forever as sinners unworthy of His gifts. Instead, He foresees such folly on our part, and has left us lessons of encouragement, as in today's parables, and set up in the Church ways and means to carry on His work of mercy for weak, mortal men. During His life on earth, Christ dealt mostly with sinners—he said he came to save the lost sheep of the house of Israel. He told the Pharisees that it was the sick who needed a doctor, not those who were well. The Pharisees in their pride thought they were not sick but they were, and He was only too ready to heal them too if only they would let Him.He spent his days then among sinners, the tax-gatherers, the robbers, the adulterers, the usurers. The twelve special friends He chose from amongst His followers had more than their share of human failings. We are all sinners to a greater or lesser degree. With this knowledge and conviction, which any true Christian must have, of the infinite mercy of God, no sinner need ever, and should never, despair. No sinner was ever lost and no sinner will ever be lost, because of his sins. Sinners are lost only because they will not trust and believe in God's mercy and turn to Him to ask for pardon.Not a day passes but our merciful Father sends out and calls to us His erring children to return to our Father's household. Today, one of those calls is in the very words of the parables you have heard. There may be another call for the sinners amongst us. There may not. Heed this one and the other call will not be necessary. Turn to God today with a truly contrite heart. God will do the rest.—Excerpted from The Sunday Readings Cycle C, Fr. Kevin O' Sullivan, O.F.M.