Memorial of the Blessed Virgin Mary, Mother of the Church 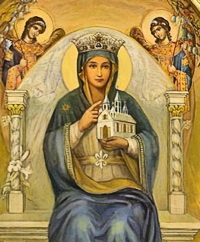 Mary, Mother of the Church: O God, Father of mercies, whose Only Begotten Son, as he hung upon the Cross, chose the Blessed Virgin Mary, his Mother, to be our Mother also, grant, we pray, that with her loving help your Church may be more fruitful day by day and, exulting in the holiness of her children, may draw to her embrace all the families of the peoples. Through our Lord Jesus Christ, your Son, who lives and reigns with you in the unity of the Holy Spirit, God, for ever and ever.

O happy Virgin, you gave birth to the Lord; O blessed mother of the Church, you warm our hearts with the Spirit of your Son Jesus Christ.

Pope Francis has decreed that the ancient devotion to the Blessed Virgin Mary, under the title of Mother of the Church, be inserted into the Roman Calendar. The liturgical celebration, B. Mariæ Virginis, Ecclesiæ Matris, will be celebrated annually as a Memorial on the day after Pentecost.

Today is also the Optional Memorial of St. Norbert.

St. Paul VI, at the conclusion of the Third Session of the Second Vatican Council in 1964, declared the Blessed Virgin Mary as “Mother of the Church," that is to say of all Christian people, the faithful as well as the pastors, who call her the most loving Mother and established that “the Mother of God should be further honored and invoked by the entire Christian people by this tenderest of titles." But it was not until February 11, 2018, that the Congregation for Divine Worship and the Discipline of the Sacraments inscribed a new obligatory Memorial of the Blessed Virgin Mary as Mother of the Church, into the General Roman Calendar. This memorial is celebrated every year on the Monday after Pentecost, which is appropriate as Mary was also present in that room for the birthday of the Church.

The decree reflects on the history of Marian theology in the Church’s liturgical tradition and the writings of the Church Fathers. It says Saint Augustine and Pope Saint Leo the Great both reflected on the Virgin Mary’s importance in the mystery of Christ.“In fact the former [St. Augustine] says that Mary is the mother of the members of Christ, because with charity she cooperated in the rebirth of the faithful into the Church, while the latter [St. Leo the Great] says that the birth of the Head is also the birth of the body, thus indicating that Mary is at once Mother of Christ, the Son of God, and mother of the members of his Mystical Body, which is the Church.”The decree says these reflections are a result of the “divine motherhood of Mary and from her intimate union in the work of the Redeemer."Scripture, the decree says, depicts Mary at the foot of the Cross (cf. Jn 19:25). There she became the Mother of the Church when she “accepted her Son’s testament of love and welcomed all people in the person of the beloved disciple as sons and daughters to be reborn unto life eternal.”In 1964, the decree says, Pope Paul VI “declared the Blessed Virgin Mary as ‘Mother of the Church, that is to say of all Christian people, the faithful as well as the pastors, who call her the most loving Mother’ and established that 'the Mother of God should be further honoured and invoked by the entire Christian people by this tenderest of titles.’”Things to Do:

Monday after Pentecost
Station with San Pietro in Vincoli (St. Peter in Chains):
In spirit we are today in the Basilica in which are preserved the blessed chains worn by St. Peter because, true to his Pentecostal mission, he had proclaimed the glad tidings of redemption. Hail venerable chains! (Msgr Martin Hellriegel).
This church was one of the tituli, Rome's first parish churches, known as the Titulus Eudoxiae or the Eudoxiana. It was built over the ruins of an Imperial villa in 442 (or possibly 439), to house the chains that had bound St. Peter in prison in Jerusalem.