Friday of the Fifth Week of Lent: Pardon the offenses of your peoples, we pray, O Lord, and in your goodness set us free from the bonds of the sins we have committed in our weakness. Through our Lord Jesus Christ, your Son, who lives and reigns with you in the unity of the Holy Spirit, God, for ever and ever.

Jesus bore our sins in his own body on the cross, so that dead to sin, we might live for righteousness. By his wounds we have been healed.

It is one week before Good Friday. Today's Mass is a further reminder of how hatred against Christ escalated in those final days before Holy Week. Fridays of Lent have a special penitential quality. —The Vatican II Weekday Missal

Today the Roman Martyrology commemorates St. Julie Billiart, a French religious who founded, and was the first Superior General of, the Congregation of the Sisters of Notre Dame de Namur.

Now, during Passiontide, we must begin to love and treasure pain and suffering. In the cross, in suffering, in our crucifixion with Christ, we shall find salvation. For Him and with Him we should bear all the slight injustices committed against us. For Him we should suffer freely and willingly the unpleasant and disagreeable things that occur to us. But our faith is weak. We flee from the cross instead of holding it dear, instead of loving it and welcoming it as our Savior did.What St. Paul says of many Christians of his day is equally true of many in our time: "For many walk, of whom I have told you often (and now tell you weeping) that they are enemies of the cross of Christ. Whose end is destruction; whose God is their belly; whose glory is in their shame; who mind earthly things" (Phil. 3:18 f.). —Excerpted from The Light of the World by Benedict Baur, O.S.B. 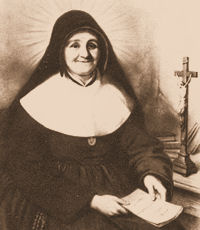 Born in Cuvilly, France, on July 12, 1751, Julie lived a humble life in a loving family. She was a woman of serenity, despite the great personal suffering she endured. The Billiart family survived many hardships, including the deaths of several children. When Julie was 16, she went to work to help support her family. At the age of 23 she became paralyzed by the trauma of a shooting that was aimed at her father. She spent more than 20 years confined to her bed, unable to care for even her most basic needs.Besides her physical pain, Julie suffered religious persecution, lived in hiding as a refugee. Throughout her suffering, she steadfastly trusted in God’s goodness. At the age of 53, Julie and her very good friend, Françoise Blin de Bourdon, along with two other women, made their vows as Sisters of Notre Dame in Amiens, France. A variety of difficult circumstances caused her to move her congregation to Namur, Belgium, several years later. Today these sisters are known as the Sisters of Notre Dame de Namur. Julie’s spirit and charism also influenced the Sisters of Notre Dame of Amersfoort, The Netherlands, as well as our own congregation of the Sisters of Notre Dame, which began in Coesfeld, Germany.Julie reached out to the poor and forgotten, she brought comfort and hope to those around her, she encouraged faith in the seeking and the lost. More than anything else, she was a witness to the deep, loving goodness of God. Her motto and mantra was: “Oh, how good God is!” In 1969 Julie was named a saint by the Catholic Church. The impact that Saint Julie had on the world continues through the life and ministry of the sisters who share in her heritage.—Excerpted from The Sisters of Notre Dame