Action Alert!
SPECIAL DOUBLE MATCH: Your gift now is worth 4x its amount! For a limited time, your gift will be matched... AND MATCHED AGAIN. 2 days left and $17,801 remaining. Donate now! 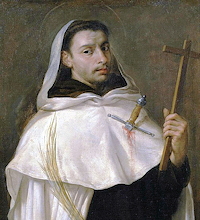 I am the vine, you are the branches. Whoever remains in me and I in him will bear much fruit, because without me you can do nothing. John 15

According to the 1962 Missal of St. John XXIII the Extraordinary Form of the Roman Rite, today is the feast of St. Pius V. His feast in the Ordinary Form of the Roman Rite is celebrated on April 30.Historically today is the feast of St. Jutta (Judith) of Russia. She was a Thuringian of a noble family whose husband lost his life crusading in the Holy Land, and who, after providing for her children, became a recluse. She is venerated as the patroness of Russia.

St. Angelus of Jerusalem
St Angelus was born in Jerusalem to a Jewish family. His mother converted to Christianity and Angelo, along with his twin brother John, was Baptised and converted along with her. His parents died while he was in his childhood and the Patriarch Nicodemus oversaw their education until the twins turned eighteen. He and his brother John entered the Carmelites then, at the Saint Anne convent near the Golden Gate to commence their novitiate. They were well learned and already spoke Greek, Latin and Hebrew. In 120, when he was twenty-six, Angelo was Ordained in Jerusalem and travelled throughout Palestine. Various miraculous cures were attributed to him as he travelled. His “Acta” tells us that he sought to avoid fame and when he was becoming known for his miracles, he withdrew from society to a hermitage to avoid the pilgrims who were following him. Angelus withdrew to a hermitage on Mount Carmel, until he was instructed by Christ in a vision, to leave Mount Carmel for Italy to preach against the Albigensians, Bulgars and other heresies. 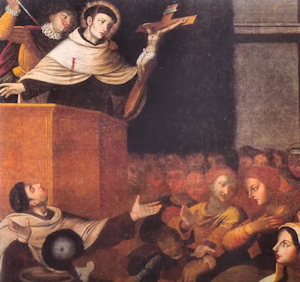 He set off on a Genoese ship on 1 April 1219 and stopped first in Messina before heading off to Civitavecchia before he ended up in Rome to meet with the pope. The friar preached in the Basilica of Saint John Lateran while in Rome where he met both Saint Francis of Assisi and Saint Dominic. He foretold that Francis would receive the stigmata while Francis foretold his premature death.st angelus of jerusalem snip From there he was a guest of the Basilians in Palermo where he was for about a month, before preaching in Agrigento for over a month before settling in Licata. He had healed seven lepers and the ailing Archbishop of Palermo Bernardo de Castanea while in Palermo. He settled on the Sicilian island though his fame as a wonderworker caused crowds to flock to him. He also had success in converting some Jews though most Jews in Palermo came to despise him for this since he himself was once Jewish.He wanted to convert a Knight named Berenger. Catholic tradition states that Berenger was living in incest and that Angelo convinced the knight’s companion to leave him. Berenger became enraged and arranged to have him attacked and murdered, in front of the Church of Saints Filippo and Giacomo in Licata. He didn’t die from the attack until four days after the attack and during that time, he prayed for his assassin and asked the civil authorities to pardon him. He showed the ultimate in forgiveness, setting an example for all those that he preached to. He was buried at Saints Filippo and Giacomo Church. His sepulchre at Licata quickly became a site of Pilgrimage. The Carmelites venerated him as a saint from 1456 and Pope Pius II Canonised him in 1459. His relics were translated to a new Church in Licata, Saint Maria del Carmine. It was through St Angelo’s intercession that the plague in the Kingdom of Naples was halted. —Excerpted from AnastpaulThings to Do: 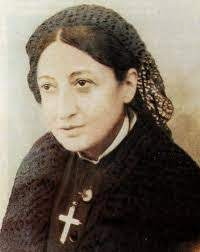 Daughter of Giovanni Battista and Magherita Lanzani. Her mother died when Caterina was seven, and her father abandoned the girl and her younger sister Giuditta. They were accepted and grew up at the orphanage of the Conventino of Bergamo. There she developed a strong faith, a big sister’s sense of responsibility, and a devotion to Our Lady and Saint Jerome Emiliani.

The sisters left the orphanage in 1823 to live with their cousins Giovanni and Antonio Cittadini, both parish priests at Calolzio, Italy. Caterina became a teacher at a girl‘s public school in Somasca in 1824. The sisters felt a call to the religious life; their spiritual director recommended that they should stay in Somasca, and become the basis of a new congregation.In 1826 the sisters rented a house in Somasca, bought and furnished a building, and in October opened a boarding school for girls. Caterina taught religion, managed the school, and instituted the oratory style of education for her girls. Word of her success spread, attracting more students. The sisters established another “Cittadini” private school in 1832, and another in 1836.Giuditta directed these new school until her sudden death in 1840. Caterini’s cousin, Father Antonio Cittadini, died in 1841, 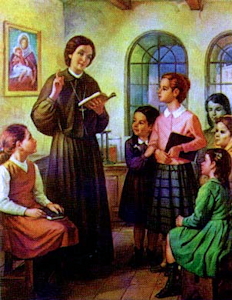 followed quickly by her spiritual director from the orphanage. The rapid succession of tragedy ruined Caterina’s health, and she fell gravely ill, but was cured through the intercession of Saint Jerome Emilani.Caterina quit her public teaching position in 1845 to manage the schools, care for the orphans, and guide the three companions who help her. To help organize the work and lives of her companions, she wrote the beginnings of a new rule similar to that of religious orders. In 1850 she obtained permission to build a private oratory to keep the Blessed Sacrament at her boarding school. In 1851 she applied for approval of her new religious family.In 1854 her bishop encouraged her work, and told her to write the rules of the new order; her first attempt, based on the Constitution of the Ursulines of Milano was rejected. A second attempt was accepted on 17 September 1854 under the title Orsoline Gerolimiane (Ursuline Sisters of Somasca). On 14 December 1857, six months after her death, the bishop of Bergamo gave his approval; the order achieved papal recognition on 8 July 1927. The order’s mandate is to teach, and to care for the abandoned; today they work in Italy, Switzerland, Belgium, Brazil, Bolivia, India, and the Philippines.She died on May 5, 1857 in Somasca, Bergamo, Italy of natural causes.—Excerpted from Catholic.netThings to Do:
Find us on Social Media.