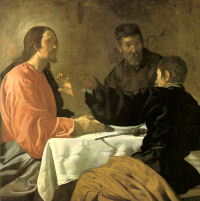 May your people exult for ever, O God, in renewed youthfulness of spirit, so that, rejoicing now in the restored glory of our adoption, we may look forward in confident hope to the rejoicing of the day of resurrection. Through our Lord Jesus Christ, your Son, who lives and reigns with you in the unity of the Holy Spirit, one God, for ever and ever.

When they drew near to the village to which they were going, He appeared to be going further; but they pressed Him to stay with them. "It is nearly evening," they said, "and the day is almost over." So He went in to stay with them. Now while He was with them at table, He took the bread and said the blessing; then He broke it and handed it to them. And their eyes were opened and they recognized Him; but He had vanished from their sight. Then they said to each other, "Did not our hearts burn within us as he talked to us on the road and explained the scriptures to us?"

Sunday Readings
The first reading is taken from the Acts of the Apostles 2:14, 22-33 and concerns bearing witness to the "name" of Jesus, and the implications which this witnessing necessarily brings with it. Peter and the apostles answered their inquisitors by stating firmly their faith in Christ, and the lesson ends with reference to their joy at having been found worthy to endure trials for the name of Christ. — A Celebrants Guide to the New Sacramentary - A Cycle by Kevin W. Irwin

The second reading is from the first Letter of Peter 1:17-21. St. Peter says that we are sons of God because of his infinite mercy in sending Christ to us as our brother. So we can rightly call God our "Father." But we must behave as true, loyal sons, during our "time of exile" on this earth, for our merciful Father is also the absolutely just God who will judge each one of us "impartially according to our deeds" when we lay down our earthly life. — A Guide to the Eucharist and Hours - Lent by Kevin W. IrwinThe Gospel is from St. Luke 24:13-35. It is the first day of the week after the great Jewish feast of the Passover and Jerusalem is trying to return to its normal routine. The shop keepers count their profits and the Temple priests congratulate themselves because they were able to kill the ‘Galilean’. For the disciples and those who were ‘foreigners’ in Jerusalem, it is time to start to return to their own homes and their normal lives.Curtains were closed and lights were dimmed not only due to the celebration of Jerusalem’s solemn festival but also because everyone had hope that the man Jesus ‘would be the One to redeem Israel’ (Lk 24:21). The two disciples from Emmaus are to be found, along their journey, talking to ‘Jesus in person’, ‘but their eyes were prevented from recognising Him’ (Lk 24:16).Why did the Lord not tell the disciples straight away who He was? Indeed, in the dialogue that the liturgy presents to us today, it almost seems that Jesus did all He could to avoid revealing His true identity. Firstly, He pretended not to know what Cleopas and his companion were discussing and then He went on to ‘explain to them the passages throughout scriptures that were about Himself’ (Lk 24:27) but without making direct reference to Himself.At the end of the journey, ‘He made to go on’ (Lk 24:28). Jesus didn’t want to play games with His disciples, but He sought to educate their hearts, and also ours, so that we won’t be ‘slow’! In fact, when faced with the Lord’s Presence, we find that the heart quickly ‘burns’ upon hearing His words as we are grateful of the fact that we were freed not by ‘gold and silver but by the precious blood of Christ’ who is the ‘blameless and spotless’ lamb (Cfr. 1 Pet 1:19). The Risen Lord uses so much gentleness with us! He doesn’t oblige us to ‘believe’ but He offers us the instruments that enable us to judge based on the infallible measure of our own hearts. As St Augustine extraordinarily wrote in the opening of his Confessions ‘our heart is restless until it rests in you’ (St. Augustine, Conf. 1,1,1:PL 32,659-661) There is still one more detail that calls for our attention and raises many questions: why did the eyes of the disciples open to recognise Jesus whilst they were at table with Him? The Eucharistic context is undeniable. The disciples are at table, the Lord is with them; He took the bread and saying the prayer of benediction, broke it. It was during the last action of the breaking of the bread that the companions recognised Jesus. It was not only the action in itself but finally Cleopas and his friends could see, with their own eyes, the hands pierced by the nails of the passion that until that very movement had remained hidden from them during the long journey on the road.It was in that very moment in which they recognised the presence of the Crucified One, that He ‘disappeared from their sight’ whilst their eyes remained fixed on the broken bread, that was left to fall ‘onto the altar’. Is it not the same experience that every one of us can have every Sunday?So, ‘they set out that instant’ (Lk 24:33). They started to understand that death is not the last word on the life of each one of us as we can not be ‘held in its power’ (Acts 2:24). This is a sign of great hope that gives us irreprehensible joy! In so much as we journey to Jerusalem — each on his own road, it must often seem long and tiring. However, now with our eyes fully opened it appears that we have the privilege to say to all the world, ‘the Lord has indeed risen’ (Lk 24:34).From the Congregation for the Clergy

Jesus organized the visible Church along the lines of a sheepfold. St. Peter, first shepherd of the visible Church, depicts Jesus as the invisible "Shepherd. . .of your souls" (Epistle). He tenderly remembers all that Jesus suffered for us "Sheep going astray."On Catacomb walls, early Christians delighted to draw pictures and to wrote explanations of the perfect understanding and love between the Good Shepherd and His sheep, such as that which exists between the "Father" and "Me."We are not only fed through the visible guidance of His Church, but also through the invisible grace of the Sacraments, especially "in the breaking of bread" (Alleluia Verse).Excerpted from My Sunday Missal, Confraternity of the Precious Blood
Stay in Touch!
PHIL LAWLER
for CatholicCulture.org
CLICK HERE TO OFFER YOUR GIFT!