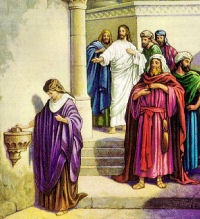 Jesus said to them, "The children of this age marry and remarry; but those who are deemed worthy to attain to the coming age and to the resurrection of the dead neither marry nor are given in marriage. They can no longer die, for they are like angels; and they are the children of God because they are the ones who will rise. That the dead will rise even Moses made known in the passage about the bush, when he called 'Lord' the God of Abraham, the God of Isaac, and the God of Jacob; and he is not God of the dead, but of the living, for to him all are alive."

Don't forget to pray for the Poor Souls in Purgatory from November 1 to the 8th. Click here for commentary on the readings in the Extraordinary Form of the Roman Rite.

Sunday Readings
The first reading is taken from the second book of Maccabees 7:1-2, 9-14 and recounts the story of the seven brothers and their mother who were arrested and put to death because they would not abandon their religion.

The second reading is from the second letter of Paul to the Thessalonians, 2:16; 3:5, in which he prays to God for them and prays that they may persevere loyally in the faith that they profess. In return, he asks them to pray that he will be able to continue to spread the Christian faith to many others.The Gospel is from St. Luke 20:27-38. We can thank the Sadducees today. They came to our Lord with what they thought was a case that would make the doctrine of the resurrection look very ridiculous. It would have appeared so, if it were understood in the crude sense which they gave it, namely, that we would come forth again from the grave in the very same bodies which we now have, with all their needs and instincts. Our Lord corrected that erroneous idea. We shall all rise to a new and eternal life, in a form and an existence very different from that of our present life. Thus, the question of ownership of wives or property will not, and cannot, arise in our new life. He gave us a brief but basic description of what our risen bodies will be. I am sure that most of us would love to know a lot more about what our future state will be like. But if we knew all, then where would our faith and trust in God come in? Some saints are said to have had brief visions of the joys of heaven. They wanted to die immediately in order to get there. God wants each one of us to [attain] heaven, by living our life on earth, and trusting in His word that heaven will be our eternal home if we do our part here below.In his brief answer to the Sadducees, Christ gives us the essential facts concerning our future status. First, he affirms that all those who have proved themselves worthy while in this life will rise to an eternal life. In that life we will become like angels. We will not be angels, pure spirits without bodies, but we will be like them in that our bodies will become "spiritual." They will lose all the restrictions and limitations imposed on them now, as mere material composites. They will no longer be subject to decline and decay as they now are. Therefore, they can never suffer from pain or sickness or weakness of any sort.Second, He clearly affirmed that those risen from the dead are no longer liable to death. Leaving aside the other greater joys of heaven, such as the beatific vision, and the close association with Christ our Savior in His risen humanity, the meeting with our blessed Mother and with all the Saints, including our relatives and friends, what a source of happiness and joy will it be for us, to know that we can never die again! The happiness and joy which we shall have will never end. We all have had moments of happiness in this life. Great as these moments were, the thought that they had to end too soon cast a shadow on our joy. There will be no shadow to darken or lessen our future joy and happiness.Many Christians, even good, pious Christians, fear death and try to keep the very thought of it far from their minds. This is very understandable for one who believes (if there is such a one) that death is the end. To a certain degree it is understandable in the case of the believer or the Christian, whose conscience is not at peace with God. That latter, however, has the means of removing his fears by removing his sins, and by putting himself right with God. The normal, pious Christian should see death as what it is, an end of his time of probation and the door to his eternal reward. It is not normal for a student to dread his graduation day. Death for the God-fearing, honest Christian is graduation day. Therefore, no Christian should be afraid of it.Of course, part of the fears which death instils come from the fear of the judgment which accompanies it. If we think every now and then, that our death is around the comer, we will turn to the God of mercy, to our loving Father, and ask for His forgiveness. He never refuses pardon to those who with a sincere heart, ask for it.Let each one of us look into our own conscience this morning. Let us ask ourselves, how we would fare if death should claim us tonight. If there are sins on my conscience, which I would not want there when facing my just Judge, I still have time to approach the merciful Father. The Christian who does this daily, or even weekly, will not worry when death calls. He can rest assured that it is the beginning of the true and everlasting life, planned for him by God before time began. — Excerpted from The Sunday Readings Cycle C, Fr. Kevin O' Sullivan, O.F.M.

In today's Mass the Church bids us prepare "without offense unto the day of Christ," that is, the day of Final Judgment (Epistle). Hence St. Paul prays with us today that our "charity may. . .abound in . . .discernment."Yes, "discernment!" lest we be deceived by the tricky questions of Pharisee friends and foes, or even the Pharisee spirit in our own conscience. Jesus gives the answer: "Render. . .to Caesar the things that are Caesar's" (symbolized by small figures at right), "and to God the things that are God's (symbolized by small figures at left).On this Sunday, officials and citizens alike may well cry out "from the depths" (Introit) for forgiveness of their failure to prepare.Excerpted from My Sunday Missal, Confraternity of the Precious Blood
Find us on Social Media.