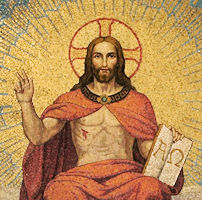 Today's Mass establishes the titles for Christ's royalty over men: 1) Christ is God, the Creator of the universe and hence wields a supreme power over all things; "All things were created by Him"; 2) Christ is our Redeemer, He purchased us by His precious Blood, and made us His property and possession; 3) Christ is Head of the Church, "holding in all things the primacy"; 4) God bestowed upon Christ the nations of the world as His special possession and dominion.Today's Mass also describes the qualities of Christ's kingdom. This kingdom is: 1) supreme, extending not only to all people but also to their princes and kings; 2) universal, extending to all nations and to all places; 3) eternal, for "The Lord shall sit a King forever"; 4) spiritual, Christ's "kingdom is not of this world". — Rt. Rev. Msgr. Rudolph G. GandasBefore the reform of the Roman Calendar in 1969, this feast was celebrated on the last Sunday of October. Click here for commentary on the readings in the Extraordinary Form of the Roman Rite.