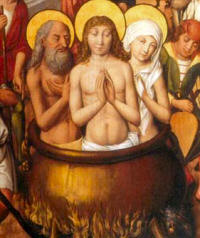 According to the 1962 Missal of St. John XXIII the Extraordinary Form of the Roman Rite, today is the feast of Sts. Vitus, Modestus and Crescentia. Very little is known of these saints. St. Vitus was martyred in Lucania in South Italy. He is invoked for the cure of epilepsy (St. Vitus' dance). 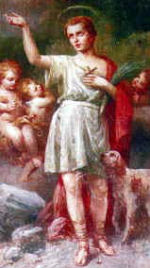 The relics of St. Vitus (also known as St. Guy) were transferred to various places -- an arm is in St. Vitus Cathedral, Prague. According to legendary Acts, the boy Vitus was baptized without the knowledge of his father. Having found out about it, his father had him beaten with rods by the magistrate. While his parent was considering more cruel punishments, Vitus, his teacher Modestus, and his nurse Crescentia fled to Sicily upon the command of an angel. But there, too, they were persecuted because of the faith. When thrown into a cauldron of burning oil, they, like the three youths, sang hymns of praise. And wild beasts would not harm them. It is related that they were then quartered. Vitus is one of the Fourteen Holy Helpers (he is invoked against epilepsy and St. Vitus' dance). 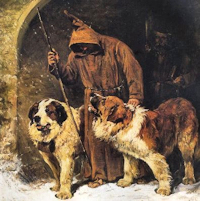 Bernard may have been the son of Count Richard of Menthon. It seems more likely though that he was of Italian birth. Nothing is really known of his parentage and early life.

Tradition reports that a marriage was being arranged for young Bernard and he fled so as to be free to give his life to God. We do know that he was ordained to the priesthood and that he was appointed Vicar General of the diocese of Aosta, Italy. For approximately forty-two years he traveled throughout the country, visiting the remotest Alpine villages. He would sometimes extend his missionary journeys into the neighboring dioceses of Geneva, Novara and Tarentaise. Bernard had the reputation for enforcing clerical discipline and he built several schools.He is probably most famous for the hospices he built on the summits of passes over the Alps. Many pilgrims from France and Germany would travel over the Alps on their way to Rome, but it was always a possibility that one would die from freezing along the way. In the 9th century a system of hospices had been attempted, but had lapsed long before Bernard's time. Bernard's hospices in the 11th century were placed under the care of clerics and laymen and were well equipped for the reception of all travelers. Eventually these caretakers became Augustinian a monastery was built close by, still exists todayAt some point in time Bernard traveled to Rome to receive formal recognition of the hospices and community and to obtain permission to accept novices. Bernard lived to the age of eighty-five and is believed to have died on May 28, 1081 at St. Lawrence Monastery in Novara, Italy. 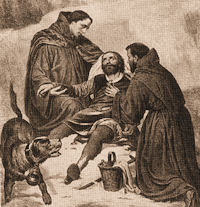 A now-famous breed of dogs, known for its endurance in high altitude and cold, was named in honor of this saint. Bernard's life has been the focus of many romantic plays and stories. Many of us may remember childhood stories of St. Bernard dogs coming to the rescue of stranded or injured victims on Alpine slopes. The dogs almost always seem to have a cask of Brandy attached to their collars and when the victims were revived by a good drink the dogs would lead them to safety.However romance was not what Bernard's life was about. He was strongly committed to the ideals taught by Christ in the Sermon on the Mount. Bernard dedicated his life to bring the message of Christ to all and to correct the abuses of clerical life which he saw. He was deeply concerned for the care of the poor and disadvantaged. Living his life in the Alps he knew the dangers present and did what he could to relieve them. He is a model, not of romance, but of deep love and compassion, in imitation of God whom he loved and served with all his heart reprimanded. —Excerpted from Christ in the DesertPatron: Alpinists; mountain climbers; mountaineers; skiers; travelers in the mountains.Symbols: Man in a mountain setting holding a bishop's crozier; white dog.Things to Do: