Other Commemorations: Third Sunday after Pentecost 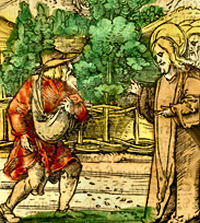 Now there was a sinful woman in the city who learned that he was at table in the house of the Pharisee. Bringing an alabaster flask of ointment, she stood behind him at his feet weeping and began to bathe his feet with her tears. Then she wiped them with her hair, kissed them, and anointed them with the ointment (Luke 7:37-38).

Sunday Readings
The first reading is taken from 2 Samuel 12:7-10; 13. This incident in the life of King David has been preserved in the Sacred Scripture because it contains a lesson for all men. It shows us the weakness of human nature, even in one so exalted as the king whom God had placed over his people. At the same time it shows the infinite mercy of God when he is dealing with a repentant sinner.

The second reading is from St. Paul to the Galatians 2:16; 19-21. He is speaking here to Peter who had come to Antioch and had given some scandal to the Gentile Christians.The Gospel is from St. Luke 7:36-50. While the mercy of God for sinners and the willingness, even eagerness, with which He welcomes back the sinner is the principal teaching in this gospel story, most if not all of us, can be cheered by that teaching. But there are two other lessons in it for us. The first lesson is that the pardoned sinner should show gratitude to God. One of the greatest proofs of gratitude is the firm resolution to avoid offending our good God anymore. Do we really mean it when we solemnly promise in our act of contrition in confession "never more to offend you and to amend my life"? There is great danger that we may make this promise out of habit of routine, without seriously intending or meaning what we say. Non-Catholics often accuse us of hypocrisy in this. "You Catholics can sin and just tell it in confession, be forgiven, and go back and sin again." This is not so. The priest's power to forgive sin, given by Christ himself, has effect only on a repentant sinner. If one goes to confession with serious sins and has no intention of avoiding those sins and the occasions which cause them, that person is not only not forgiven, but is adding a further sin by abusing and insulting God in that great gift of His mercy, the Sacrament of Penance. Such cases are rare, thank God. We are repentant and we mean to avoid such sins in future. However, the fact that one may fall again is always possible. This does not prove the previous confession to be invalid. But the person's attempts to avoid the occasions will be proof of sincere repentance. It will also be a sign of gratitude to the merciful God who forgave the sins.The second reading is for those amongst us who succeed, thanks to God's grace, in avoiding serious sins. We must avoid the sin of the Pharisees. They were, on the whole, devout men and did many a good deed. However, they gave all the credit, not to God, but to themselves. They grew proud of their good works and despised all others who did not do as they did.The good Christian must avoid any such temptation. We must never say, as the Pharisee did, "thank God I am not like the rest of men, tax-gatherers and sinners," but rather say what the saints said when they saw or heard of some great sinner: "there would be St. Francis only for the grace of God."Yes, the avoidance of serious sin is something for which we must thank God. We should never praise ourselves because of this, and never, never should we despise the neighbor who is not so fortunate. Instead, we must help that neighbor by every means in our power to return to God's friendship through sincere repentance. This will prove our love for God and neighbor, and our sincere appreciation of the great graces given us by our merciful Lord to keep us free from grave sins. Excerpted from The Sunday Readings by Fr. Kevin O'Sullivan, O.F.M.

Simon Peter received the "call to action." How did he respond? "At Thy word I will lower the net." What was his reward? "All . . . were amazed at the catch." The call to Catholic Action has been repeated by the Popes in our day. "They (have) beckoned to their comrades . . . to come and help them" (Gospel).More than ever in this age of global war, "all creation groans . . . in pain," waiting for "redemption" from life-killing sin; waiting for its "adoption" into Divine Life "as sons" of God (Epi9stle). For their sake we must act as members of a Church Militant, not of a Church "pacifist" or sleeping. "Enlighten my eyes, that I never sleep in death" (Offertory).Do not be afraid to answer this call for Catholic Action; "put out into the deep!" "Lower your nets!" even though "armies in camp should stand together against" you (Introit).Excerpted from My Sunday Missal, Confraternity of the Precious Blood