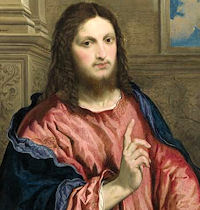 O God, who through the grace of adoption chose us to be children of light, grant, we pray, that we may not be wrapped in the darkness of error but always be seen to stand in the bright light of truth. Through our Lord Jesus Christ, your Son, who lives and reigns with you in the unity of the Holy Spirit, one God, for ever and ever.

Today is the feast of St. Irenaeus which is superseded by the Sunday Liturgy.Click here for commentary on the readings in the Extraordinary Form of the Roman Rite.

Commentary for the Readings in the Extraordinary Form:
Fifth Sunday After Pentecost

"Go first to be reconciled to they brother, and then come and offer thy gift" (Gospel).

This is Brotherhood Sunday! Human experience confirms the need of this Divine teaching. Only when the Fatherhood of God is recognized, will the Brotherhood of Man be realized. Returning good for evil is possible only to those who love God (Epistle). Oh, how much our hate-torn world needs this prayer: "Pour into our hearts. . .an experience of They Love" (Prayer).In the practice of the Golden Rule, we plead with the Divine"Helper" against worldly persecution (Introit) and diabolical "enemies" (Postcommunion).How can one who harbors anger, envy, bitterness, indifference, aversion of any kind against his neighbor, have part in the Sacrifice of Him Who offers Himself for His enemies? The sacrifice of our selfish or even wounded feelings for Christ's sake, is a most acceptable "gift" to "leave. . .before the altar" (Gospel).Excerpted from My Sunday Missal, Confraternity of the Precious Blood
Stay in Touch!
THOMAS AND JAMES
for CatholicCulture.org
CLICK HERE TO OFFER YOUR GIFT!