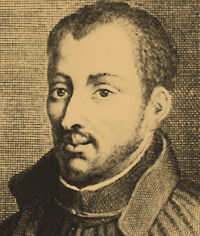 Historically today is the feast of St. John Francis Regis, who was ordained into the Society of Jesus in 1630. He was gifted with a marvelous talent for missions, he labored for the conversion of the Huguenots, assisted the needy, and aided in the rescue of wayward women. Also the historical feast of St. Benno of Meissen who labored to convert the Slavs, established numerous religious edifices, and is said to have founded the cathedral of Meissen.

St. John Francis Regis
Born into a family of some wealth, John Francis was so impressed by his Jesuit educators that he himself wished to enter the Society of Jesus. He did so at age 18. Despite his rigorous academic schedule he spent many hours in chapel, often to the dismay of fellow seminarians who were concerned about his health. Following his ordination to the priesthood, he undertook missionary work in various French towns. While the formal sermons of the day tended toward the poetic, his discourses were plain. But they revealed the fervor within him and attracted people of all classes. Father Regis especially made himself available to the poor. Many mornings were spent in the confessional or at the altar celebrating Mass; afternoons were reserved for visits to prisons and hospitals.

The Bishop of Viviers, observing the success of Father Regis in communicating with people, sought to draw on his many gifts, especially needed during the prolonged civil and religious strife then rampant throughout France. With many prelates absent and priests negligent, the people had been deprived of the sacraments for 20 years or more. Various forms of Protestantism were thriving in some cases while a general indifference toward religion was evident in other instances. For three years Father Regis traveled throughout the diocese, conducting missions in advance of a visit by the bishop. He succeeded in converting many people and in bringing many others back to religious observances.Though Father Regis longed to work as a missionary among the North American Indians in Canada, he was to live out his days working for the Lord in the wildest and most desolate part of his native France. There he encountered rigorous winters, snowdrifts and other deprivations. Meanwhile, he continued preaching missions and earned a reputation as a saint. One man, entering the town of Saint-Andé, came upon a large crowd in front of a church and was told that people were waiting for "the saint" who was coming to preach a mission.The last four years of his life were spent preaching and in organizing social services, especially for prisoners, the sick and the poor. In the autumn of 1640, Father Regis sensed that his days were coming to a conclusion. He settled some of his affairs and prepared for the end by continuing to do what he did so well: speaking to the people about the God who loved them. On December 31, he spent most of the day with his eyes on the crucifix. That evening, he died. His final words were: "Into thy hands I commend my spirit."He was canonized in 1737.— Excerpted from Saint of the Day, Leonard Foley, O.F.M.Patron: Kansas City, MO; marriage; illegitimate childrenThings to Do: 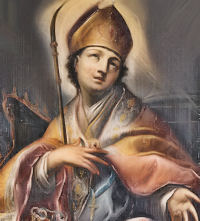 In the year 1066 a nobleman named Benno was made Bishop of Meissen, in Saxony. The Emperor of Germany at that time, Henry IV, was a boy of sixteen, and he was a very different kind of person from St. Henry II, who had always tried to rule the State for the good of religion and the Church. Henry IV, on the other hand, intended to try to make the Church obey the State, and one of his plans was to make the German bishops entirely dependent on him. He, and not the Pope, gave to each newly made bishop the crosier and the ring which showed his 'marriage' to the Church.

But it happened that at that time there was one of the greatest of the Popes, St. Gregory VII, who was equally determined that the Emperor should do nothing of the kind; and this led to the long struggle you read about in your history books. It was called the `Investiture Contest,' and went on for many years all over Europe to decide whether the Pope, as Head of the Church, or the ruler of the State should `invest' bishops with the symbols of their holy office.The reason St. Benno is important among the saints of Germany is that, unlike some of the German bishops, he stood out against the Emperor, and because not even imprisonment could make him say that Henry was right. We do not know very much about his life, apart from the warfare and struggles of the time. But there is one story which has become famous. When the Pope had said that the Emperor, because he would not obey the Church, was not to be allowed to receive Holy Communion Henry hoped that the German bishops would take no notice of this `excommunication.’ He rode with his followers to Meissen and demanded entry to the cathedral. Benno realized that there was nothing he could do to keep him out unless he shut the cathedral to everyone, so he ordered everything to be fastened up from the inside and then the great door locked on the outside. When this had been done, in front of all the people, he threw the key far out into the river Elbe.Henry knew that if he gave his soldiers orders to break down the door he would have everyone against him, so he rode away, vowing vengeance on the Bishop. When he had gone the question was how the cathedral could be opened again. Benno, after much prayer, told a fisherman to throw his net into the river as near as he could to where the key had fallen, and, so the story says, among the fish that were caught that day was one which had the key hanging on to one of its fins. So, among the paintings of the saints which you can see today, you can always recognize St. Benno, because he is holding a fish and a key.He lived to be a very old man (some say that he was nearly a hundred when he died), and at the end of his life he followed the example of so many of the German saints and went to preach to the barbarians on the outskirts of the country who were still heathen. He was buried in his cathedral at Meissen, but when, at the time of the German Reformation, four hundred years later, the countryside left the Catholic Church and became Protestant his body was removed, for safety, to Munich, and from that time St. Benno has been considered the Patron Saint of that city. Patron: MunichThings to Do:
Find us on Social Media.