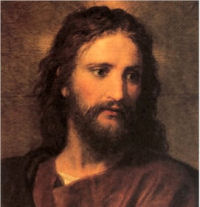 "Whoever eats my flesh and drinks my blood has eternal life, and I will raise him on the last day. For my flesh is true food, and my blood is true drink. Whoever eats my flesh and drinks my blood remains in me and I in him. Just as the living Father sent me and I have life because of the Father, so also the one who feeds on me will have life because of me. This is the bread that came down from heaven. Unlike your ancestors who ate and still died, whoever eats this bread will live forever (John 6:54-58)."

Sunday Readings
The first reading is taken from the Book of Proverbs 9:1-6 in which wisdom is described as a person.The second reading is from the Letter of St. Paul to the Ephesians 5:15-20. St. Paul urges his converts to live according to the Christian wisdom they have received: to live according to the will of the Lord. He urges them to avoid drunkeness, to be full of the Holy Spirit and full of gratitude to God for all the gifts given them.The Gospel is from St. John 6:51-58. We, like the Christians of the year 90 A.D., have a great advantage over those Galileans to whom Christ spoke in Capernaum. We are convinced that Christ was the Son of God who had become man in order to make us sons of God. He died on the cross as a sacrifice of atonement to his Father for us and for our sins. He himself said "Greater love than this no man hath that a man lay down his life for his friends." That is the greatest sacrifice a man can make for anyone. Christ, however, was more than man, he was God too; he was therefore able to do more for his friends. He was able to leave to his Church the power to repeat the sacrifice of the cross under the symbolic form of the consecrated bread and wine. By this repetition and recalling: "do this in memory of me," his followers could give infinite honor to the Father and renew the infinite atonement made on their behalf on Calvary. Furthermore, by partaking of this real sacrifice offered to God Christians could be united with Christ and with the Father in an intimate manner. The Eucharist is a sacrifice and a sacrament. As a sacrifice it is the repetition, the re-enactment, of Christ's sacrifice of himself on Calvary. It is a sacrifice of infinite value for it is the same Christ, the God-man, who is offering himself, through the medium of his human representative, to his heavenly Father. It is a sacrament for it is a visible sign instituted by Christ to give us grace. Under the visible appearances of bread and wine, it is the source of all grace whom we receive within us. The staple human nourishment, bread and wine, are changed into the infinite source of our staple spiritual nourishment, the body and blood of Christ. The Blessed Eucharist is a mystery in so far as our minds cannot understand how exactly Christ is present on our altars after the words of consecration. The very words given us by Christ himself have been said over the bread and wine. But while we cannot grasp how exactly this happens, we can have no room for doubt but that it does happen: for we have the solemn affirmation of Christ the Son of God that it is so. In today's Gospel he clearly says "the bread which I shall give ... is my flesh. He who eats my flesh and drinks my blood has eternal life." And during the course of the Last Supper "he took bread and blessed and broke it and gave it to them saying `take, this is my body.' And he took a cup . . . he gave it to them and they all drank of it. And he said to them: `this is my blood of the new covenant which is shed for many"' (Mk. 14: 22). That the Apostles accepted his word and made this ceremony of partaking of the consecrated bread and wine the central act of the Christian worship from the very beginning of the Church, is fully proved in the Acts of the Apostles and in the writings of St. Paul. This has continued down to our day and will continue as long as men inhabit the earth.For devout Christians the biggest mystery about the Blessed Eucharist is the mystery of the divine love that moved Christ to leave us such an intimate and such an effective memorial of the love he proved to have for us on Calvary. We certainly do not deserve this extra proof of his love. He opened heaven for us, he showed us how to get there, he did not leave us to struggle alone. His infinite and divine love made him find a means of remaining always with us in our tabernacles, and of opening the floodgates of divine mercy each time this sacrifice is offered on our altars. Furthermore, he wanted to give himself to us as the life-giving food which would give us the spiritual strength for salvation. The infinite love of Christ for us is the only explanation of this. And what return do we make for this love? We attend at the sacrifice of the Mass realizing that by active participation we are capable of giving infinite honor to God. Do we receive this truly heavenly food, the body of Christ, with the proper preparation? Do we visit Christ in the church where he ever remains ready to receive us and to listen to our requests? If the Jews of old could boast: "For what great nation is there that has a god so near to it as the Lord our God is to us" (Dt. 4:7), how much more truly can we Christians make such a boast, for Christ our Lord has deigned to remain with us on our altars until the end of time. Excerpted from The Sunday Readings by Fr. Kevin O'Sullivan, O.F.M.