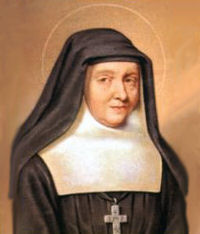 Lord, you chose Saint Jane Frances to serve you both in marriage and in religious life. By her prayers help us to be faithful in our vocation and always to be the light of the world. We ask this through our Lord Jesus Christ, your Son, who lives and reigns with you and the Holy Spirit, God, for ever and ever. Amen.

According to the 1962 Missal of Bl. John XXIII the Extraordinary Form of the Roman Rite, today is the feast of St. Claire. Historically it is the feast of St. Euplius, a deacon, under Emperors Diocletian and Maximian. He was tortured for his confession of Christ and finally martyred by being put to the sword. 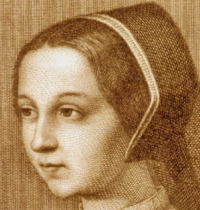 The death of her husband, who was accidentally shot while on the chase (1601), she bore with Christ-like composure and with all her heart forgave the person who had killed him; then she acted as sponsor for one of his children in order to show her forgiveness openly. There was a holy friendship between her and her spiritual guide, Francis de Sales; with his approval she left her father and children and founded the Visitation nuns.Thus, too, it should be with us—firm yet forgiving, and each at the proper place and in the proper measure. Our zeal must not make us hard, fanatic; neither may love degenerate into sentimentalism. In fundamentals, in faith, and in the commandments we must be firm, immovable, with no trace of tolerance; but in our contacts with men, patient, forgiving, tender, conciliatory. The Christian ought be firm and resolute as a father, mild and self-sacrificing as a mother. This tension between complementary virtues we find exemplified in a heroic degree in St. Jane Frances de Chantal. —Excerpted from The Church's Year of Grace, Pius Parsch. "Love! love! love! my daughters; I know nothing else." Thus did Jane de Chantal, the glorious cooperatrix of St. Francis in establishing the Visitation of holy Mary, often cry out in her latter years. "Mother", said one of the sisters, "I shall write to our houses that your charity is growing old, and that, like your godfather St. John, you can speak of nothing but love." To which the saint replied: "My daughter, do not make such a comparison, for we must not profane the saints by comparing them to poor sinners; but you will do me a pleasure if you tell those sisters that if I went by my own feelings, if I followed my inclination, and if I were not afraid of wearying the sisters, I should never speak of anything but charity; and I assure you, I scarcely ever open my mouth to speak of holy things, without having a mind to say: Thou shalt love the Lord with thy whole heart, and thy neighbour as thyself." Patron: Forgotten people; in-law problems; loss of parents; parents separated from children; widows.Things to Do: 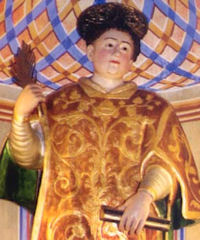