Saturday of the Twenty-Ninth Week of Ordinary Time 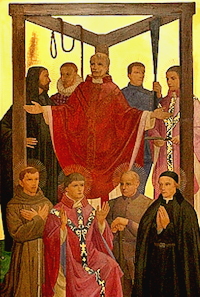 According to the 1962 Missal of Bl. John XXIII the Extraordinary Form of the Roman Rite, today is the feast of Sts. Chrysanthus and Daria, a husband and wife who carried on an active apostolate among the noble families of Rome during the third century. When they were denounced as Christians, they underwent various tortures with great constancy, and they were buried alive in a sandpit in the year 283.

Today the Roman Martyrology remembers the martyrs Crispin and Crispinian, who died in the persecution of Diocletian by the sword. They were brothers, possibly twins, and cobblers. St. Crispin's day has been immortalized by Shakespeare's Henry V speech before the Battle of Agincourt in 1415. 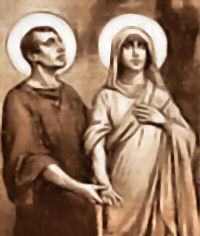 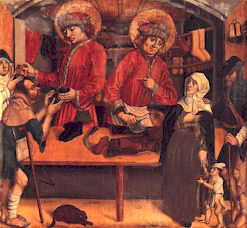 This feast was immortalized by Shakespeare in his play Henry V, (Act 4, Scene 3). The king gave a rousing speech (called "Saint Crispin's Day) on the eve of the Battle of Agincourt, fought on this day in 1415. (Read a synopsis of the battle.) The English, although outnumbered, soundly defeated the French. In England this was a religious holiday on which commoners and serfs got a day of rest.Patron: Cobblers; glove makers; lace makers; lace workers; leather workers; saddle makers; tanners; weavers.Symbols: Cobbler's last; shoe; shoemaker's tools; awl and knife saltire; millstones; flaying knives; rack.Things To Do:
Find us on Social Media.