Monday of the Twenty Eighth Week of Ordinary Time 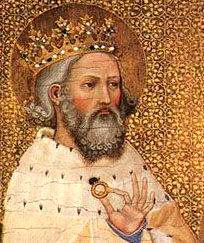 St. Edward (1003-1066), called the Confessor, was the grandson of St. Edward, king and martyr, and became king of England at the age of forty-seven. As king he was noted for his gentleness, humility, detachment and angelic purity. He preserved perfect chastity in his wedded life. So little was his heart set on riches that he freely dispensed his goods at the palace gate to the sick and poor. His reign was one of almost continuous peace. The people were prosperous and ruined churches were rebuilt. All spoke affectionately of the wise measures of the "good King Edward." Before the reform of the General Roman Calendar today was his feast.