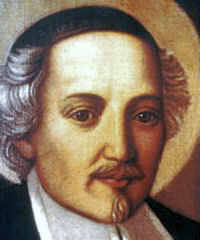 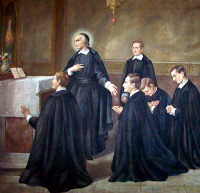 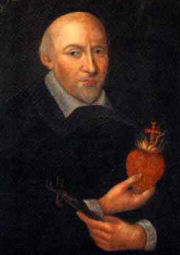 In his parish mission work, John was disturbed by the sad condition of prostitutes who sought to escape their miserable life. Temporary shelters were found but arrangements were not satisfactory. A certain Madeleine Lamy, who had cared for several of the women, one day said to him, "Where are you off to now? To some church, I suppose, where you'll gaze at the images and think yourself pious. And all the time what is really wanted of you is a decent house for these poor creatures." The words, and the laughter of those present, struck deeply within him. The result was another new religious community, called the Sisters of Charity of the Refuge.He is probably best known for the central theme of his writings: Jesus as the source of holiness, Mary as the model of the Christian life. His devotion to the Sacred Heart and to the Immaculate Heart of Mary led Pius XI to declare him the father of the liturgical cult of the Hearts of Jesus and Mary. He was also the author of several books which served his work, e.g., The Ideal Confessor and The Apostolic Preacher. He died at the age of seventy-nine. Excerpted from the Saint of the Day, Leonard Foley, O.F.M. Symbols: Priest with or presenting the Sacred Hearts of Jesus and Mary.Things to Do: 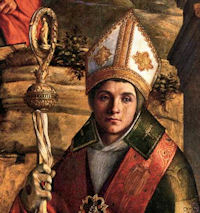 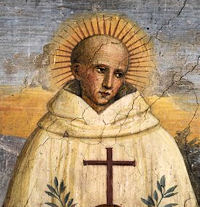 Towards the end of 1318, or the beginning of 1319, while deep in prayer, he saw a ladder on which monks in white habits ascended, helped by angels, and awaited by Jesus and Mary.In order to secure the legal position of his group, Bernardo, together with Patrizio Patrizi, visited the bishop of Arezzo, Guido Tarlati di Pietramala (1306-c.1327) under whose jurisdiction Accona fell at the time. On the 26th March 1319 he was given a Decree authorizing him to build the future monastery of Santa Maria di Monte Oliveto, and instituted “sub regula sancti Benedicti”, with certain privileges and exemptions. Through his legate, the bishop received their monastic profession. In choosing the Rule of St. Benedict, Bernardo accepted Benedictine coenobitism and, wishing to honour Our Lady, the founders wore a white habit. Welcoming the small group of monks, the bishop said: “Since your fellow citizens glory in placing themselves under the patronage of the Virgin, and because of the virginal purity of the glorious Mother, it pleases you to wear a white monastic habit, therefore showing outwardly that purity which you harbor within.” (Antonio di Barga, Cronaca 5). The white habit characterized various forms of medieval monasticism, amongst which the Camaldolese, Carthusians, Cistercians and the monks of Montevergine.With the laying of the first stone of the church on the 1st of April 1319, the monastery of Santa Maria di Monte Oliveto Maggiore was born. The hermits became monks according to the Rule of St Bendict to which they made some institutional changes. The most characteristic element of this institutional change recorded in an episcopal document 28th March 1324, was the temporariness of the abbatial office, and the abbot-elect would have to be confirmed by the bishop of Arezzo. When the time came to elect an abbot, Bernardo succeeded in withdrawing himself from those eligible because of his infirmity of sight. Therefore, Patrizio Patrizi was elected first abbot (1st of September 1319). Two other abbots followed: Ambrogio Piccolomini (1st of September 1320) and Simone di Tura (1st of September 1321). On the 1st of September 1322, Bernardo could no longer oppose the wishes of his brethren and so became the fourth abbot of the Monastery he founded, remaining abbot until his death. An Act dated 24th September 1326 attests that the Apostolic Legate, Cardinal Giovanni Caetani Orsini (†1339), dispensed abbot Bernardo from the Canonical impediment of Infirmity of Sight, hence validating his election. From Avignone, with three Bulls dated 21st January 1344 (Significant Vestrae Sanctitati: acknowledges the foundation and requests pontifical privileges; Vacantibus sub religionis: canonical approval of the new community; Solicitudinis pastoralis officium: the faculty to erect new monasteries in Italy) Clemente VI approved the Congregation which numbered ten monasteries. Bernardo did not go to Avignone himself, but sent two monks: Simone Tendi and Michele Tani.Significant evidence of the spiritual personality of Bernardo consists in the fact that, even though the monks had decided not to re-elect an abbot at the end of his annual mandate, they decided to ignore this, re-electing Bernardo for twenty-seven consecutive years, until his death. Another act of trust in Bernardo’s paternity was seen in the General Chapter of the 4th of May 1347 when the monks granted him the faculty to govern without recourse to the Chapter and the brethren, trusting that he would do all in conformity to God’s Will and for the salvation of all.Bernardo tried at least twice, in 1326 and 1342, to lay down the abbatial office, declaring to the Pope’s Legate and Jurists that he was not a priest but only in Minor Orders, also citing the existing dispensation from his function as abbot because of his persistent infirmity of vision. However his leadership was asserted fully legitimate even according to the canonical norms of the time. With the Pontifical Approbation of a new Benedictine Congregation named “Santa Maria di Monte Oliveto”, Bernardo is the initiator of a resolute Benedictine monastic movement.Bernardo left his monks an example of a holy life, the practice of the virtues to a heroic level, an existence dedicated to the service of others, and to contemplation. During the Plague of 1348 Bernardo left the solitude of Monte Oliveto for the monastery of San Benedetto a Porta Tufi in Siena. In the city, the disease was particularly dire. On the 20th August 1348, while helping his plague-stricken monks, he himself, along with 82 monks, fell victim of the Plague.This hero of penance and martyr of charity did not go by unnoticed, as Pius XII observed in a letter sent to Abbot General Dom Romualdo M. Zilianti on the 11th April 1948, to commemorate the forthcoming sixth centenary of the death of Blessed Bernardo. The venerable abbot was buried near the monastery church in Siena. All the plague-stricken bodies were put in a common pit of quick-lime outside the church. Unfortunately the search for the bodies of the victims of the plague, both in Siena and in and around the Abbey of Monte Oliveto Maggiore, has been unsuccessful to this day.Excerpted from the Vatican WebsiteThings to Do: