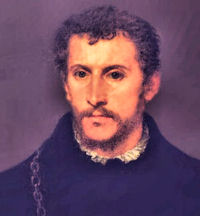 All-powerful God, increase our strength of will for doing good that Christ may find an eager welcome at his coming and call us to his side in the kingdom of heaven where he lives and reigns with you and the Holy Spirit, one God, for ever and ever. Amen.

When Noah finally left the Ark and settled on dry land, he built an altar to worship the Lord who had saved him. God placed a rainbow in the sky as a token of his resolve to never visit such a disaster over all the face of the all the earth again.

Noah was a savior, preserving the natural life of all within the Ark; Christ brings supernatural life to mankind and preserves that life within His Mystical Body, the Church.

St. Edmond Campion
The most famous of the English martyrs, Edmund Campion (1540-1581) gave up a promising career at Oxford and an invitation to enter Queen Elizabeth's service in order to become a Catholic priest and minister to the abandoned Catholics who greatly desired the sacraments.

Campion was born in London of Catholic parents who later became Protestant. He attended St. John's College, Oxford, where he gained renown as a lecturer and a following of students who called themselves "Campionites." When he was 26 years old, he gave a speech of welcome in Latin to Queen Elizabeth on her visit to Oxford; he made such an impression on the queen that she and Lords Cecil and Leicester tried to recruit him for her service. He probably took the Oath of Supremacy, and was ordained a deacon for the Established Church. The more he studied to be a priest, the more convinced he became that the Catholic Church had the true faith. He moved to Dublin in 1569 in an effort to find a place to live as a Catholic, but the Irish capital showed an anti-Catholic feeling that drove him back to London. In June 1571 he left England for Douai, Belgium where the recently founded English College trained seminarians for England.Campion finished his degree in 1573 and set out soon after for Rome with the intention of becoming a Jesuit. Within a month of his arrival in Rome, he was accepted into the Society. At that time there was neither an English province nor an English mission, so he was assigned to the Austrian province and went to Prague and Brno to make his novitiate. He remained in Prague after he took vows and was ordained there, expecting to spend the rest of his life teaching in that city. He wrote and directed plays for his students and won renown as an orator. 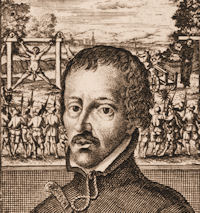 The English Jesuit's life changed course suddenly when the Superior General in Rome decided to open a mission in England. Father Campion was one of the first to be assigned to it. He stopped in Rome on his way back to England and joined Father Rober Persons and Brother Ralph Emerson. They turned north and joined other recruits for the new mission at Saint Omer in Flanders. English spies in Flanders learned of their impending departure and informed the English ports of entry, who awaited their arrival. Campion and Emerson left the Continent on the evening of June 24. Campion disguised himself as a "Mr. Edmonds," a jewelry merchant. Port authorities were suspicious, but Campion answered their questions adequately and they let the merchant enter.It had been eight years since Campion had left England. He briefly remained in London where he wrote a manifesto of the mission which has become known as "Campion's Brag." Its point was that the mission was religious, not political; so well-written and powerful was it, that copies were made and widely distributed to confirm Catholics in their faith. Campion himself moved on to Berkshire, Oxfordshire, Lancashire and Yorkshire. He would stay at a Catholic house for one or two nights or visit households where Catholics were employed. His pattern was to arrive during the day, preach and hear confessions during the evening, and then celebrate Mass in the morning before moving on to the next location. He continued to write and composed a book addressed to the academic world; entitled Rationes decem ("Ten Reasons"), the book gave arguments to prove the truth of Catholicism and the falsity of Protestantism. It was printed by the end of June 1581. Many of the 400 copies printed were left on the benches of Oxford's University Church of St. Mary. Campion was still well-enough known that the book was eagerly read.Campion's freedom to minister to Catholics soon ended. In July he left London and stopped at the Yate family in Berkshire. The family's Catholic neighbors learned that the Jesuit priest had been there and pressed the Yates to invite him back. Mrs. Yate sent word to Campion who returned, unfortunately at a time when a professional priest-hunter was in the congregation pretending to be Catholic. After Mass the hunter slipped away to notify the authorities who quickly returned to the house but could not find any priests. The guards remained on the grounds, listening for sounds of unusual activity. They alertly heard a group of people leaving a meeting that Campion had addressed. The guards searched the house again, this time finding Campion and two other priests. 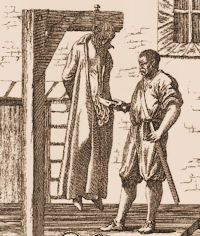 The three were taken to the Tower of London on July 22, where Campion was put in a cell so small he could neither stand upright nor lie down. After three days there he was brought to Leicester house, where he met Queen Elizabeth for a second time. She offered him the opportunity to renounce his Catholic faith and become a Protestant minister, with the offer of great advancement. He refused and was returned to his cell; five days later he was tortured on the rack. He had four conferences with Anglican divines, something he himself had requested in the book rationes decem, but the disputations were inconclusive, partly because the first one was held shortly after he had been tortured. The government determined that he should be executed, but they needed a stronger charge than the fact that he was a Catholic priest. On Nov. 14, the priests were led to Westminster Hall where charges were raised against them that they had formed a conspiracy against the life of the queen, had exhorted foreigners to invade the country and had entered England with the intent of fomenting rebellion to support the invaders. At his trial six days later, Campion was asked to raise his right hand and take an oath; he was unable to do so because of recent torture, so another one of the priests had to lift his arm for him. Campion attempted to defend all the priests by pointing out their motives were religious, not political; but they were found guilty of high treason and condemned to be hanged, drawn and quartered. The priests joined in singing the Te Deum when they heard the verdict.Campion remained in chains for another 11 days, and then was dragged through the muddy streets of London to Tyburn. With him were Briant, and Father Ralph Sherwin, a diocesan priest. As Campion forgave those who had condemned him, the cart he was standing on was driven from under him and he was left hanging. The executioner then cut him down and tore out his heart and intestines before cutting his body into pieces. Briant had been tried a day after Campion, but was executed soon after the other Jesuit. He was cut down while still alive after being hung so that he could be disemboweled and his body cut into quarters. He was only 25 years old.Excerpted from Jesuit Saints and Blesseds © 2011 Society of Jesus

Blessed Charles de Foucauld was born in Strasbourg, France on September 15th, 1858. Orphaned at the age of six, he and his sister Marie were raised by their grandfather in whose footsteps he followed by taking up a military career.

He lost his faith as an adolescent. His taste for easy living was well known to all and yet he showed that he could be strong willed and constant in difficult situations. He undertook a risky exploration of Morocco (1883-1884). Seeing the way Muslims expressed their faith questioned him and he began repeating, “My God, if you exist, let me come to know you.”On his return to France, the warm, respectful welcome he received from his deeply Christian family made him continue his search. Under the guidance of Fr. Huvelin he rediscovered God in October 1886. He was then 28 years old. “As soon as I believed in God, I understood that I could not do otherwise than to live for him alone.”A pilgrimage to the Holy Land revealed his vocation to him: to follow Jesus in his life at Nazareth. He spent 7 years as a Trappist, first in France and then at Akbès in Syria. Later he began to lead a life of prayer and adoration, alone, near a convent of Poor Clares in Nazareth.

Ordained a priest at 43 (1901) he left for the Sahara, living at first in Beni Abbès and later at Tamanrasset among the Tuaregs of the Hoggar. He wanted to be among those who were, “the furthest removed, the most abandoned.” He wanted all who drew close to him to find in him a brother, “a universal brother.” In a great respect for the culture and faith of those among whom he lived, his desire was to “shout the Gospel with his life”. “I would like to be sufficiently good that people would say, “If such is the servant, what must the Master be like?”On the evening of December 1st 1916, he was killed by a band of marauders who had encircled his house.He had always dreamed of sharing his vocation with others: after having written several rules for religious life, he came to the conclusion that this “life of Nazareth” could be led by all. Today the “spiritual family of Charles de Foucauld” encompasses several associations of the faithful, religious communities and secular institutes for both lay people and priests.Excerpted from the Libreria Editrice Vaticana Things to Do:

On entering the court he fortified himself against its seductions by many austerities and continual ejaculatory prayers. He had a marvellous zeal for the redemption of captives, and for their deliverance would sell his jewels, his food, his clothes, and his very shoes, once by his prayers breaking their chains and opening their prisons. His great delight was in making rich shrines for relics.His striking virtue caused him, a layman and a goldsmith, to be made Bishop of Noyon, and his sanctity in this holy office was remarkable. He possessed the gifts of miracles and prophecy, and died in 665. Excerpted from Lives of the Saints, by Alban Butler, Benziger Bros. ed. [1894] Patron: Horses, jockeys, veterinarians, craftspeople (of all trades), electricians, computer scientists, mechanics, miners, security guards, gas station workers, taxi cab drivers, farmers, servants, and coin collectorsThings to Do:
Find us on Social Media.