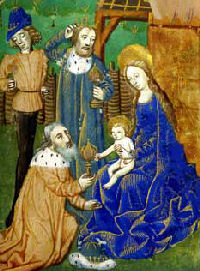 A Twelfth Night party is a good idea to teach the significance of the feast of Epiphany, or the feast of the Manifestation, to non-Catholics and Catholics alike. The following contains a few ideas on how to plan such a party.

The idea of the party is explained to the guests somewhat as follows:

"This is the twelfth night of Christmas. You've all heard of Shakespeare's "Twelfth Night," but did you know what it was the twelfth night of? Once upon a time the celebrating began with Christmas, and lasted for twelve days — instead of beginning six weeks before and petering out the day after. How it came to be twelve days is a long story, and it's all rather mysterious even to historians. But one thing is certain: the feast of Christmas is the beginning, and January 6, the feast of the Epiphany or Manifestation, is the climax. A lot of things we've heard will make more sense when we know this — for example, many of the old folk carols which talk about the birth of Christ on January 6th, and especially the song, "The Twelve Days of Christmas."

"This song talks about giving presents and that is very appropriate, for giving belongs to Christmas. Actually, it seems a pity to concentrate all of our gift giving on the first day of Christmas because that takes some of the surprise out of the rest of them. We ought to keep right on for all twelve in one way or another. The Epiphany is the climax of all gift-giving, because it was on this day the three kings or Wise Men brought their gifts to the Christ-Child in Bethlehem. At least, this is the day we celebrate their gift-giving, allowing for a bit of poetic license in the liturgy.

(The master of ceremonies asks someone to read the Gospel of the Epiphany feast.)

"So now you see why you have all brought gifts, and gifts that represent the most precious and lovely things that mankind has to offer. The Magi didn't know anything about Jewish customs — they brought what was most valued by them, and these gifts of gold, frankincense and myrrh have become symbols of the most noble and spiritual tribute that can be paid by man to God. . . gold representing love; frankincense, worship and prayer, and myrrh, the spiritual value of pain and suffering."

(Some of the "gifts" which the guests have brought might be presented here; others are reserved for suppertime. The great liturgical theme of the wedding feast is introduced at the supper or refreshment time with some such words as these:)

"The feast of the Manifestation has more to it than just the Wise Men, although we're not so familiar with the other ideas. The Epiphany is the feast of Christ's showing-forth His divinity to men, and this took place on various occasions. One that is always associated with today's feast is our Lord's first miracle of turning water into wine at the wedding feast. We can't have a Twelfth Night party without remembering that. So we've laid out our table like a wedding board, with an Epiphany cake in the center. And since gifts belong to weddings, too, we can go right on opening them."

(More of the presentations are made by the guests. Then the Epiphany cake is cut, and the three "kings" revealed in the traditional way; they rule the party for the rest of the evening. At the end of the party, each king is asked to choose from among the contributions the one he liked best. Then, in the name of all, they may offer these gifts, perhaps in the following way.)

All stand or kneel behind the kings, around some designation of Christ: a crib, cross, or perhaps simply facing east or looking out the window at the stars.

King I: We have seen His star in the east, and have come with gifts to adore the Lord.

Reader: Give to the Lord, you families of nations, Give to the Lord glory and praise; Give to the Lord the glory due his name! Bring gifts, and enter his courts; Worship the Lord in holy attire. Tremble before him, all the earth; Say among the nations: the Lord is king. He has made the world firm, not to be moved; He governs the peoples with equity.

King II: We have seen His star in the east, and have come with gifts to adore the Lord.

Reader: Let the heavens be glad and the earth rejoice; let the sea and what fills it resound; Let the plains be joyful and all that is in them! Then shall all the trees of the forest exult before the Lord, for he comes; For he comes to rule the earth. He shall rule the world with justice, And the peoples with his constancy.

King III: We have seen His star in the east, and have come with gifts to adore the Lord. The procession to the crib and the prayer-ceremony described at the conclusion of the children's Twelfth Night party also could be adapted here for an older group.

Reader: From the Collect of the Epiphany Mass: O God, who on this day by the leading of a star didst manifest Thine only-begotten Son to the Gentiles, mercifully grant that we who know Thee now by faith, may be brought to the contemplation of the beauty of Thy majesty. Through Christ our Lord. Amen.