Catholic Activity: Story of the Holy Name of Jesus 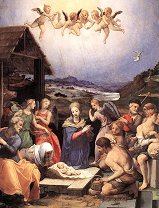 The Feast of the Holy Name of Jesus has been restored by Pope John Paul II on January 3. Here is the story of St. Bernardin and the monogram of IHS.

On the Sunday after New Year's Day the Church celebrates the feast of the Holy Name of Jesus. [Editor's Note: This feast is now January 3.]

"But, Mother, this is Our Lord's feast day!" And Lorli, aged five, looked as if she had made a big discovery.

"We have to celebrate it — but how? Do you think Our Lord would like His monogram used as a table decoration?" asked Martina, who had just in that year copied beautifully the "I.H.S." in genuine gold-leaf on a deep cornflower-blue background.

And so it was done. The monogram of the name of Jesus was put as centerpiece on the table, surrounded by flowers. We happened to have company on that day and somebody asked, pointing to the golden letters, "What is that?" And so we told the story:

Around 1400 there lived in Italy a holy Franciscan monk by the name of Bernardin. From the name of his home town, he became famous as Bernardin of Siena, and famous he became for his great eloquence. He was the most renowned preacher of his days and he always had a great love and admiration for the Holy Name of Jesus. Soon his fame had spread all over Italy, and people came from far distances to hear Bernardin preach. All the churches were too small to accommodate the crowds. In Siena he had to use the big piazza. There was one great vice prevalent in his town at that time: card-playing. Every night the men spent all their time and money gambling, and the women did not know how to keep the fathers of the family at home and how to prevent the household money from being gambled away; so they went to St. Bernardin and asked him to do something about it.

On the next Sunday, when the piazza was jammed with people as usual, Bernardin got up in his improvised pulpit and preached with so much fervor against card-playing that the people were deeply affected. At the end of his sermon he asked them to bring their packs of playing cards and put them on a pile in the middle of the piazza, and they really did so, until there was a large pyramid of playing cards. The Saint lit a candle from the vigil light of the altar and set fire to the pile. As he turned around, a man approached him, tears streaming down his cheeks. "Padre," he wailed, "and what is to become of me?" And he informed the Saint that he was the man who had manufactured the cards. "How shall I earn a living now? I'm facing starvation if no one buys my cards any more." The Saint looked startled for a moment. This had never occurred to him. He closed his eyes and sent a silent, fervent prayer to Our Lord asking for enlightenment. When he opened his eyes again, he smiled at the man and said, "Give me a board and a piece of chalk." When the man had produced both, St. Bernardin drew, in the lettering of his time, the letters "I.H.S." (from the Latin "Jesus Hominum Salvator" meaning "Jesus, Saviour of men"). "Print this instead," said the Saint, handing the board to the man. "Golden letters on a blue background, and have them ready next week."

And on the next Sunday, when all the people had returned bringing friends along until there was not a square foot left on the huge piazza, the Saint gave his famous sermon on the efficacy of the Name of Jesus and how we should carry it with us, how we should place it in our rooms over our bed, in our prayer books, over the house doors, how we should carry it in the form of a medal around the neck because it is the monogram of the Name of Him Whom we should love more than anybody or anything else. The people took this advice, and the little man who had formerly sold playing cards sold from now on the famous monogram, which soon appeared cut in stone, carved in wood, modeled in clay, printed on paper, used in illuminations, and which is decorating our table today because of the feast of the Holy Name which it represents.