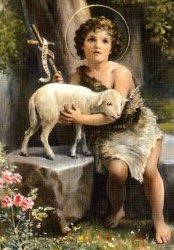 Father Weiser explains the origin of honoring St. John the Baptist, the feast days and Church's traditions and provides some customs celebrated on his feasts in various countries.

This saint was highly honored throughout the whole Church from the beginning. Proof of this is, among other things, the fact that fifteen churches were dedicated to him in the ancient imperial city of Constantinople. Being the precursor of our Lord, he was accorded the same honor as the first great saints of the Christian era, although he belonged to the Old Covenant. The fact that Christ praised him so highly (Matthew 11, 11) encouraged, of course, a special veneration. Accordingly, we find a regular cycle of feasts in his honor among the early Christian churches.

It was the firm belief among the faithful that John was freed from original sin at the moment when his mother met the Blessed Virgin (Luke 1, 45). Saint Augustine mentioned this belief as a general tradition in the ancient Church. In any case, it is certain that he was "filled with the Holy Spirit even from his mother's womb" (Luke 1, 15) and, therefore, born without original sin. Accordingly, the Church celebrates his natural birth by a festival of his "nativity," assigned exactly six months before the nativity of Christ, since John was six months older than the Lord. As soon as the Feast of Christmas was established on December 25 (in the fifth century) the date of the Baptist's birth was assigned to June 24.

The question arises of why June 24, and not 25. It has often been claimed that the Church authorities wanted to "Christianize" the pagan solstice celebrations and for this reason advanced Saint John's feast as a substitute for the former pagan festival. However, the real reason why Saint John's Day falls on June 24 lies in the Roman way of counting, which proceeded backward from the calends (first day) of the succeeding month. Christmas was "the eighth day before the Kalends of January" (Octavo Kalendas Januarii). Consequently, Saint John's nativity was put on the "eighth day before the Kalends of July." However, since June has only thirty days, in our way of counting the feast falls on June 24.

The Council of Agde, in 506, listed the Nativity of Saint John among the highest feasts of the year, a day on which all faithful had to attend Mass and abstain from servile work. Indeed, so great was the rank of this festival that, just as on Christmas, three Masses were celebrated, one during the vigil service, the second at dawn, the third in the morning. In 1022, a synod at Seligenstadt, Germany, prescribed a fourteen-day fast and abstinence in preparation for the Feast of the Baptist. This, however, was never accepted into universal practice by the Roman authorities.

On August 29 the death of the saint is honored by a Feast of the Beheading. A third festival was celebrated in the Oriental Church in honor of "Saint John's Conception" (on September 23), commemorating the fact that an angel had announced his conception. This feast, however, was not adopted by the Latin Church. The Greek Rite (on the day after Epiphany), and recently also the Latin Church (on January 13), keep a feast in memory of Saint John baptizing the Lord.

The Baptist is patron of tailors (because he made his own garments in the desert), of shepherds (because he spoke of the "Lamb of God"), and of masons. This patronage over masons is traced to his words:

Make ready the way of the Lord, make straight all his paths. Every valley shall be filled, and every mountain and hill shall be brought low, And the crooked shall be made straight, and the rough ways smooth. (Luke 3, 4-6.)

All over Europe, from Scandinavia to Spain, and from Ireland to Russia, Saint John's Day festivities are closely associated with the ancient nature lore of the great summer festival of pre-Christian times. Fires are lighted on mountains and hilltops on the eve of his feast. These "Saint John's fires" burn brightly and quietly along the fiords of Norway, on the peaks of the Alps, on the slopes of the Pyrenees, and on the mountains of Spain (where they are called Hogueras). They were an ancient symbol of the warmth and light of the sun which the forefathers greeted at the beginning of summer. In many places, great celebrations are held with dances, games, and outdoor meals.

Fishermen from Brittany keep this custom even while far out at sea in the Arctic Ocean. They hoist a barrel filled with castoff clothing to the tip of the mainsail yard and set the contents on fire. All ships of the fishing fleet light up at the same time, about eight o'clock in the evening. The men gather around the mast, pray and sing. Afterward they celebrate in their quarters, and the captain gives each crew member double pay.

Another custom is that of lighting many small fires in the valleys and plains. People gather around, jump through the flames, and sing traditional songs in praise of the saint or of summer. This custom is based on the pre-Christian "need fires" (niedfyr, nodfyr) which were believed to cleanse, cure, and immunize people from all kinds of disease, curses, and dangers. In Spain these smaller fires (fogatas) are lighted in the streets of towns and cities, everybody contributing some old furniture or other wood, while children jump over the flames. In Brest, France, the bonfires are replaced by lighted torches which people throw in the air. In other districts of France they cover wagon wheels with straw, then set them on fire with a blessed candle and roll them down the hill slopes.

As the first day of summer, Saint John's Day is considered in ancient folklore one of the great "charmed" festivals of the year. Hidden treasures are said to lie open in lonely places, waiting for the lucky finder. Divining rods should be cut on this day. Herbs are given unusual powers of healing, which they retain if they are plucked during the night of the feast. In Germany they call these herbs Johanneskraut (St. John's herbs), and people bring them to church for a special blessing.

In Scandinavia and in the Slavic countries it is an ancient superstition that on Saint John's Day witches and demons are allowed to roam the earth. As at Halloween, children go the rounds and demand "treats," straw figures are thrown into the flames, and much noise is made to drive the demons away.

It should be noted, however, that in the Catholic sections of Europe the combination of the ancient festival of nature lore with the Feast of the Baptist has resulted in a tradition of dignified celebration, which has come down to our day. People gather around the fireplace, dressed in their national or local costumes, and sing their beautiful ancient songs. When the fire is lighted, one of them recites a poem that expresses the thought of the feast. Then they pray together to Saint John for his intercession that the summer may be blessed in homes, fields, and country, and finally perform some of the traditional folk dances, usually accompanied by singing and music.

LITURGICAL PRAYER — O God who hast made this an honored day for us by the birth of Saint John: bestow upon Thy people the grace of spiritual joys, and guide the hearts of all Thy faithful into the way of eternal salvation.