The last day of April was a druidic feast marking the beginning of summer and revels of witches. The evening of St. Walburga's feast day is known as Walpurgisnacht. Though the saint had no connection with this festival, her name became associated with witchcraft and country superstitions because of the date. Feast Day Cookbook gives some explanations in these crossovers and a recipe for Maibowle. St. Walburga's feast is no longer on the General Roman Calendar. 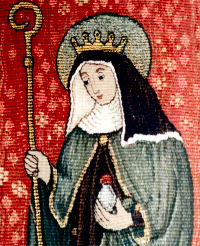 The last day of April was first celebrated as a druidic feast of some importance in honor of spring's return, and bonfires were lighted to frighten away the spirits of darkness which might prevent the arrival of the joyous goddess of the springtide. For Christians it became the feast of Saint Walburga, the daughter of a Saxon king of the eighth century, who went to Germany at the call of her uncle, Saint Boniface, to aid in the work of evangelizing the Germanic tribes and remained to found and rule monasteries and convents. The Abbess of Heidenheim was given great veneration in the Low Countries and Germany during her lifetime and was honored after her death for her learning and the many miracles she wrought. But the observance of her feast, or rather its eve, Walpurgisnacht, came to be held with many of the pagan traditions peculiar to the day, so that it grew to resemble the celebration of Halloween. At its best, it is the night when protection is invoked against murrains of fields and crops and the spirits of evil; at its worst, it is a night when witches ride and dark deeds are done.

The original pagan feast, celebrated as the Eve of Beltane in the British Isles, was accompanied by lighting of new fires and feasting on certain foods retained by later customs in Scotland, Wales, and Ireland. We are told that Beltane Cakes, large and scalloped, were set against hot stones to bake while a caudle (custard) was eaten, and beer and whiskey consumed. Many customs were connected with these cakes, among them that the person drawing a piece blackened by the fire became the "carline" who must be sacrificed to the fire. Later in Wales when cakes were cooked on ordinary stoves, light and dark oatmeal cakes were made, and the one who drew the dark cake was required to jump three times through the flames of the lighted bonfire.

We have been unable to trace any authentic recipes for Beltane Cakes, and everyone knows how to make a custard or caudle. However, on this eve one might well anticipate the day to come by brewing the first Maibowle.