Celebrating the Solemnity of Saints Peter and Paul 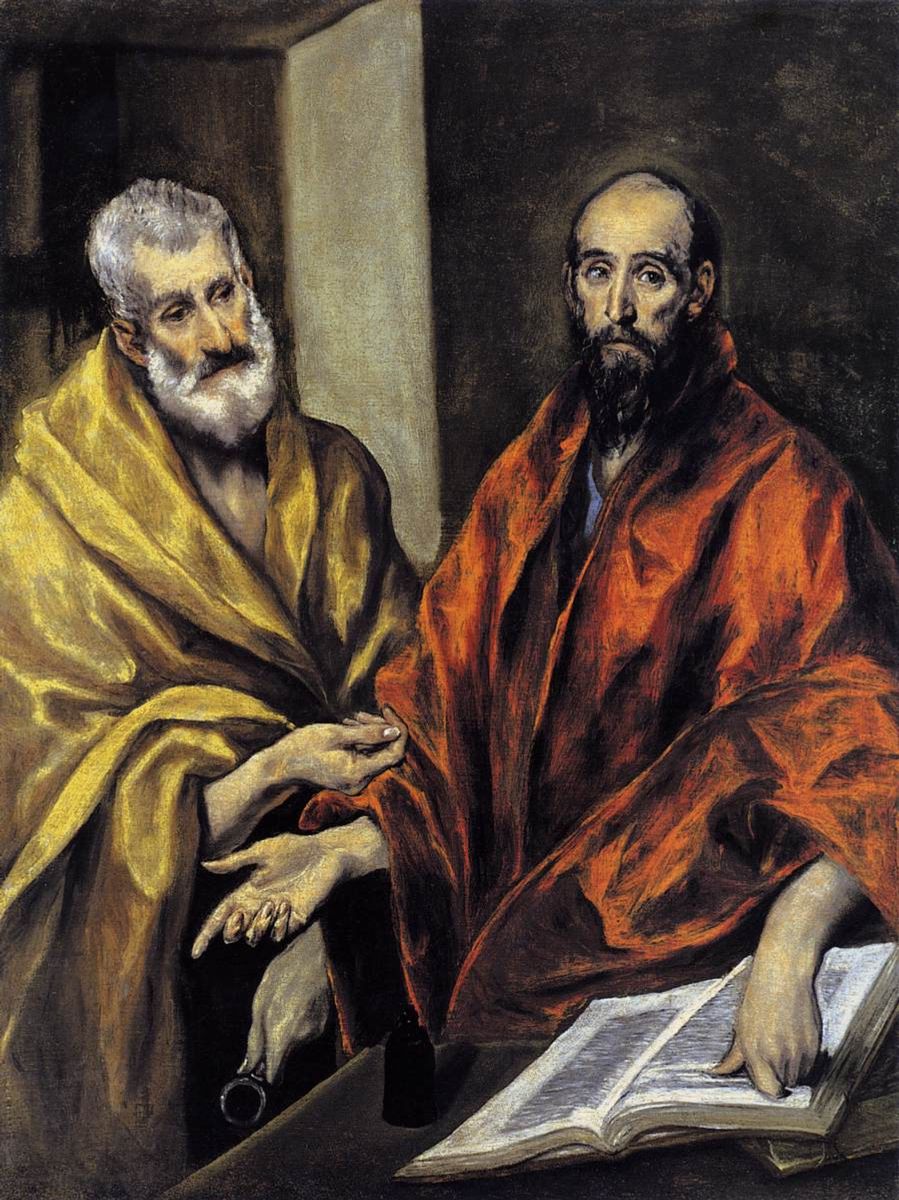 This post is from the archives. It was originally published June 29, 2016:

June 29 is the Solemnity of Saints Peter and Paul. This is a holyday of obligation in most countries (but not in the United States).

This is major holiday in Rome, with schools, shops and banks closed. The day is filled with both religious and secular celebrations. During the Mass at St. Peter’s Basilica, the Pope will convey a pallium to various archbishops to symbolize the special relationship with the Pope and communion with the Church of Rome.

A particular highlight of the day is the special adorning the bronze statue of St. Peter:

On 29 June, the feast of St. Peter, the statue is clothed with an amice, alb, tiara, stole, red cope and a ring so that it practically seems to come to life. Fine marble, Sicilian jasper, green porphyry and the “marble of St. Peter” decorate the pedestal.

A question has plagued me since childhood: why do Peter and Paul share a feast day? Why does it seem like they are in competition with each other? Other apostles share feast days, such as Philip and James the Lesser on May 3 and Simon and Jude on October 28. But it does seem that the first Pope would have his own feast day. Why Peter and Paul on the same day?

In addition to sharing the main feast day, the current Liturgical Calendar, revised in 1969, has an even number of feasts for Saints Peter and Paul. For Peter there is the Solemnity on June 29, then the Chair of St. Peter on February 22. St. Paul is celebrated on June 29 and January 25 for the Conversion of St. Paul. On November 18, there is an Optional Memorial for the Dedication of the Basilicas of Peter and Paul, again, with Peter and Paul sharing the same day.

Before the revision of the calendar, there were several other feasts, but anytime there was a feast of St. Peter, there would be a commemoration of St. Paul on that day, and vice versa. Neither Saint would be excluded.

All this brings to mind St. Paul’s words to the Corinthians, from the very beginning there were tensions among the faithful, of choosing either Peter or Paul:

I appeal to you, brethren, by the name of our Lord Jesus Christ, that all of you agree and that there be no dissensions among you, but that you be united in the same mind and the same judgment. For it has been reported to me by Chloe’s people that there is quarreling among you, my brethren. What I mean is that each one of you says, “I belong to Paul,” or “I belong to Apollos,” or “I belong to Cephas,” or “I belong to Christ.” Is Christ divided? Was Paul crucified for you? Or were you baptized in the name of Paul? I am thankful that I baptized none of you except Crispus and Gaius; lest any one should say that you were baptized in my name. For Christ did not send me to baptize but to preach the gospel, and not with eloquent wisdom, lest the cross of Christ be emptied of its power. For the word of the cross is folly to those who are perishing, but to us who are being saved it is the power of God (1 Cor 1:10-18).

Of course our Liturgical Calendar isn’t reflecting a compromise to ease a division between two saints. The simplest and most enduring explanation for the shared feast is that tradition (with a small “t”) shows that St. Peter and St. Paul both were martyred by Emperor Nero on the same day in two different places around Rome. St. Peter was crucified upside down in Rome, and St. Paul was beheaded outside the walls of Rome (where each basilica is located).

And I believe the focus of celebration of this day is to find the common ground between these saints, as St. Leo the Great points out:

There must be general rejoicing, dearly beloved, over this holy company whom God has appointed for our example in patience and for our confirmation in faith. But we must glory even more in the excellence of their fathers, Peter and Paul, whom the grace of God has raised to such a height among all the members of the Church that He has set them like twin lights of eyes in that Body whose head is Christ.

About their merits and virtues, which surpass all power of telling, let us not make distinctions or draw comparisons; for both were chosen, they were alike in their labors, they were partners in death. But, drawing upon our own experience and upon the teaching of our forefathers, we believe and are sure that in the troubles in this life we must ask to be helped by the prayers of our special heavenly patrons in obtains God’s mercy; for as we are weighed down by our own sins, so are we raised up by the Apostles’ merits. Through our Lord Jesus Christ, to whom together with the Father and the Holy Ghost is equal power and identical Divinity, for ever and ever. Amen. (Sermon of Leo the Great, P.L. 54, Sermo 82).

In the home celebration, I’m not going to focus on separate dishes to honor one saint over another (although Peter is a nameday saint for one of our sons), but rather find common factors. And in this case, celebrating their Roman connection is my focus—Roman dishes (inspired by the Vatican Cookbook) and in particular popular Italian desserts, like gelato or tiramisu or cannolis—something very simple.

Today we honor together in martyrdom these two great saints, Paul, the Apostle to the Gentiles and Peter, Supreme Pontiff and first Bishop of Rome. We recognize the similarity of the “same large heart overflowing with love for mankind, the same naturally impulsive disposition; there is the same energy and self-forgetfulness, the same burning zeal for the good of all men, the same joy in suffering for Christ” (Feasts of Mother Church by Mother Mary Salome p.143).

Saints Peter and Paul, pray for us!