Buddhism was introduced to the United States near the beginning of the 20th century, but over the past 30 years or so, Buddhism has crept into our cultural consciousness. For some it is known as having been co-opted into a marketing campaign (such as to promote the Zen Micro MP3 player), for others as a cause for Hollywood celebrities, for still others a trend in architectural design, etc.

But for many others—approximately one million U.S. believers among 380 million worldwide who profess to be Buddhists rather than merely being spiritually or creatively influenced by its philosophies—it is a religion or deeply felt philosophy for both living and bringing peace to our troubled world.

The mountain gate to the City of Ten Thousand Buddhas, California.

I’ve gained some familiarity with Buddhism or Buddhist influences over the years. I have been acquainted with several individuals, including one lapsed Catholic and one agnostic, who were attracted to different variations of Buddhism (there are three prevalent in the United States, most familiarly Zen and Tibetan), and I have had some interesting discussions on the relative merits of Buddhism and whether any portions of it can be compatible with Catholicism.

My other encounters have been both academic and practical. I learned about Buddhism in both high school and college (for apologetic purposes). But I’ve also had a long-term fascination with design principles, marketing, and how these relate to business practices. In the course of investigating these subjects, you’d be surprised at how much Buddhist influence pops up, particularly in (but by no means limited) to the wellness industry.

The most recent item to pique my interest in Buddhism and its related phenomena was a December 2005 article in National Geographic that briefly describes Buddhism, its general principles, the demographics of its current adherents and the evolution and migration of its original varieties. In reading the article, I began to wonder if most Catholics know what Buddhism teaches and whether or not those teachings are compatible with Catholic beliefs.

What is Buddhism? Is it a philosophy or system of ethics like Confucianism, or a religion? Most importantly, does Buddhism or any of its practices lend anything to the practice of the Catholic faith? 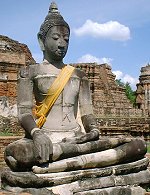 Even devout followers of Buddha are divided over the matter of whether or not Buddhism is a religion or a philosophy. Part of the allure of Buddhism is that its essential tenets are supposedly based on Buddha’s observations (empirical evidence, as it were) rather than faith, and that Buddha reputedly encouraged his followers to personally test ideas rather than follow leadership blindly. From that viewpoint, it appears to be a philosophy. However, due to certain spiritual elements, the fact that Buddhism defines a sort of “salvation” and how to get there, and its monastic tradition, it appears to be a religion.

Practically, it is six of one, a half dozen of the other; the question of how to classify Buddhism (as being a theological or philosophical pursuit) is largely immaterial. No matter how it is classified, Buddhism still may possess indispensable articles of belief that are contrary to the teachings of the Church.

The essentials of Buddhism revolve around the Four Noble Truths: 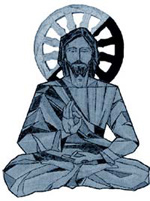 An image of Christ assuming a position of contemplation in the "yoga" style (New Age example).

This is a very cursory abstract of Buddhist principles, but introductory material to the subject (in printed articles and online) can be nearly as cursory. So if you were just doing a quick survey or were on the receiving end of a New Age pitch for practicing Buddhist meditation techniques, etc., you wouldn’t necessarily see an incompatibility with Christian values.

These apparent similarities led to heightened Catholic interest in Buddhism with the rise of the New Age movement in the 1980’s and 1990’s. Some imagined that Buddhism had many new insights to offer to Christianity in general and Catholicism in particular due to their supposed compatibilities. 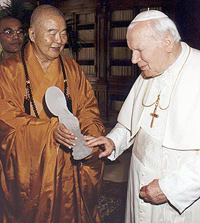 Buddhist leader Hsing Yun of Taiwan presents Pope John Paul II with a crystal Madonna during their private meeting at the Vatican.

But Pope John Paul II threw water on that fire in 1994’s Crossing the Threshold of Hope with comments regarding Buddhism that received a good amount of press at the time (and also a lot of debate). In his comments, our late pontiff really didn’t pull any punches, calling Buddhism “in large measure an ‘atheistic’ system’.” He pulled the carpet out from under comparisons to Catholicism by pointing out that the ultimate end of man for Christians is union with God, while for Buddhists it is Nirvana (complete detachment, or a state of nothingness).

Two separate warnings concluded the Pope’s remarks on this subject. The first deals with the notion of extracting certain characteristics of Buddhism and incorporating them into Catholic practice:

For this reason it is not inappropriate to caution those Christians who enthusiastically welcome certain ideas originating in the religious traditions of the Far East—for example, techniques and methods of meditation and ascetical practice. In some quarters these have become fashionable, and are accepted rather uncritically. First one should know one's own spiritual heritage well and consider whether it is right to set it aside lightly. Here we need to recall, if only in passing, the brief but important document of the Congregation for the Doctrine of the Faith "on certain aspects of Christian meditation" (10/15/1989). Here we find a clear answer to the question "whether and how [Christian prayer] can be enriched by methods of meditation originating in different religions and cultures".

Second, relating Buddhism to the New Age movement and its Gnostic aspects, the Pope wrote:

A separate issue is the return of ancient gnostic ideas under the guise of the so-called New Age. We cannot delude ourselves that this will lead toward a renewal of religion. It is only a new way of practicing gnosticism—that attitude of the spirit that, in the name of a profound knowledge of God, results in distorting His Word and replacing it with purely human words. Gnosticism never completely abandoned the realm of Christianity. Instead, it has always existed side by side with Christianity, sometimes taking the shape of a philosophical movement, but more often assuming the characteristics of a religion or para-religion in distinct, if not declared, conflict with all that is essentially Christian.

By means of these and other articulate remarks, the Holy Father clearly drew a sharp line between Buddhism and Christianity, rejecting any notion that the two are of like purpose and insisting that Buddhist principles are to be gravely cautioned against.

Interestingly, some critics of the Pope’s remarks stated with vigor that Buddhism is not “atheistic”. Counter attacks varied. One Buddhist commented in rebuttal that followers of Buddha believe that he was the “teacher of gods and men”, and that some Buddhists believe in multiple deities or spirits that look after the affairs of both men and nature. Others pointed out that certain teachings of Buddha specifically point to an uncreated being without which nothing would be in existence.

Please note that though these arguments object to the Pope’s characterization of Buddhism, they in fact do nothing to bring it closer to Catholicism.

I don’t deny that there is an attractive simplicity to Buddhism in its “middle road” of peace and moderation, as well as its solemn and ascetic rituals. Buddhism offers for your consideration inner peace and material detachment, as well as specific practices for improving oneself and making the world a better place. The world is fast-paced, panicky, and loud. The Buddhist life is presented as being well paced, with well reasoned intentions that transform into peaceful actions.

These things can be inviting to wandering Catholic souls fed up with the world’s egocentrism, but who feel that their own faith is, by contrast, considerably more bulky and complex. There is a feeling among many Catholics that to be truly Catholic in every action necessitates extensive time for research, and that you have to be an intellectual to practice spiritual meditation. Buddhism, I regret to say, is probably better “marketed” than the Catholic faith. But the Pope is right: for Buddhists, salvation is a privation of individual consciousness; for Catholics salvation is an eternally fulfilling relationship with a loving Creator. There is no comparison. 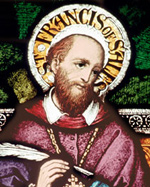 Thus the Pope also comments that Catholic spirituality picks up where Buddhism leaves off. For both Buddhists and Catholics “detachment” is important, but for Catholics detachment is not an end in itself. St. Francis de Sales preached that man must desire to “possess his soul” rather than allow it to be possessed by worldly things. Catholics pursue this for the purpose of elevating their soul by offering it back to Christ. So detachment is a means to a rich and meaningful “higher awareness” (if you will) that reaches its culmination in seeing God face to face.

In truth, from its individual practices to its ultimate goal, Buddhism possesses nothing of value that is not already possessed and perfected by Catholicism.

Peter Mirus is a business, marketing, and technology consultant with more than 20 years of experience working with companies and nonprofits, ranging from start-ups to large international organizations. From 2004-2014 he contributed articles on the Catholic Faith, culture, and business to the CatholicCulture.org website.
Read more
Next post »
« Previous post
Sound Off! CatholicCulture.org supporters weigh in.