Duquesne University Press has done something noteworthy by publishing two new full-color books which present masterpieces of art with accompanying text to illustrate key moments in the history of the Church, and also the lives of the saints. The books, originally published in French and authored by journalist Jacques Duquesne and art editor François Lebrette, are entitled The History of the Church through 100 Masterpieces and The Lives of the Saints through 100 Masterpieces.

The format of the books is simple. In each case, an introduction summarizes the overall subject matter in just a few pages, either the history of the veneration and selection of saints or the history of the Church. Then there is a series of 100 facing pages, with a magnificent painting reproduced on the right-hand page and the left-hand page given to the text which explains the scene—either the major points to be noted about the life and cult of the saint, or the situation in Church history represented there.

The authors favor a fairly breezy style with a touch of detachment and a dash of humor. This makes the text very readable, though some oversimplification is inevitable on grounds of brevity alone. Moreover, I suspect many readers would prefer a more reverent tone and a more spiritual focus. At the same time, there are many human motives, constantly shifting interests, and plenty of cultural peculiarities at play in the glorious life of the Church down through history. If the authors chose to reflect on both the Divine and the human, this is not necessarily a bad thing. Overall, for such a short text, the accuracy is quite high, and the ultimate appreciation of the authors for the Church and her saints is clear.

The Saints are typically traditional rather than recent; most achieved their fame before the development of the formal canonization process. One must allow here for the establishment of artistic traditions and the existence of masterpieces portraying each selection. In addition, the earlier saints provide wider scope for interesting legends. The choice of Alexander Nevsky, who was canonized by the Russian Orthodox Church, is peculiar, but on the whole the Catholic tradition is respected and overwhelmingly represented.

The paintings are well-chosen and fully identified, but both books would have benefited from brief biographies of the painters along with some background and artistic commentary on each chosen work. They would also have benefited from tables of contents to list each saint or episode of Church history, and each artist. Without this aid, the only way to mine the books is to open up each volume and page through them. 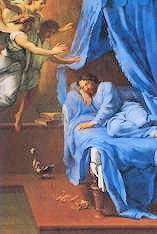 But each page does provide easy access. In reading about Saint Bruno in the Saints book, for example, we learn not only of his importance as the founder of the Carthusians, who grew to 200 houses by the time of the French Revolution, but of the three angels who comforted him when he was dismissed as a canon by his bishop. They appeared to him when he became a hermit and sent him to the Bishop of Grenoble. We also learn some of the vocabulary which has derived from the French word for each of Bruno’s foundations, which was called a “Charterhouse”—that is, chartreuse. The painting is “Saint Bruno’s Dream” by Eustache Le Sueur (1616-1655). It is currently housed in the Louvre in Paris. 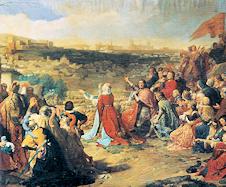 Similarly, in the portrayal of the late 15th century defeat of the Moors by Ferdinand and Isabella in the History book, we learn that this was not only the culmination of seven centuries of Catholic defensive efforts against the Islamic conquest of southern Europe but also the beginning of a questionable struggle to establish lasting control by chasing both Muslims and Jews out of Spain altogether. There is also a nod to the earlier victories of Rodrigo Días de Bivar—the legendary hero El Cid—in 1085. The painting here is Jusepe Ribera’s 17th century portrayal of “The Capture of Granada” from the Cathedral of Burgos.

Both books are nicely printed on glossy paper with heavy glossy covers and glued bindings, in a size of 8.5” (h) by 6.5” (w). So these are in effect light versions of coffee-table books—but happily they are priced accordingly. As indicated, the text is not deep and these are not works of spirituality, but those who love the Western artistic tradition will appreciate how the authors use great paintings to bring the Church, her heroes—and in tough times also her opponents—to life.