My relationship with St. Joseph was relatively slow to develop. I hadn’t singled him out in my devotional life until two of my sons-in-law undertook a special devotion to Joseph, in the course of which they alerted me to this prayer: 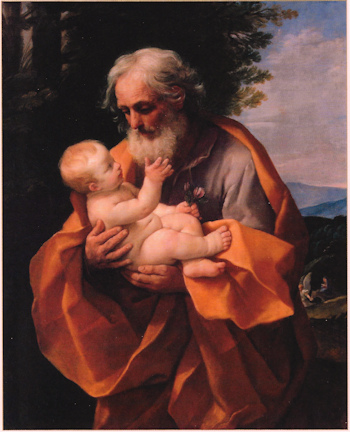 “O St. Joseph, whose protection is so great, so strong, so prompt before the throne of God, I place in you all my interests and desires. O St. Joseph, do assist me by your powerful intercession and obtain for me from your Divine Son all spiritual blessings through Jesus Christ, Our Lord; so that, having engaged here below your heavenly power, I may offer my thanksgiving and homage to the most loving of fathers.

“O St. Joseph, I never weary contemplating you and Jesus asleep in your arms. I dare not approach while He reposes near your heart. Press Him in my name and kiss His fine head for me, and ask Him to return the kiss when I draw my dying breath. St. Joseph, patron of departing souls, pray for us. Amen.”
[more information]

After that, my wife and I began saying this prayer each evening before we began our Rosary. It seems a fitting framework for approaching the woman and child he protected so well during his lifetime here on earth.

It is not too much to say that my own pilgrimage to Joseph was similar to that of the whole Church, which came only slowly to develop a strong devotion to Our Lady’s protector and Our Lord’s foster father—and has remained a little confused about how best to deal with Joseph in both prayer and art. Should he be ignored in favor of the Virgin and Child? Should he be portrayed as old and somewhat doddering to strengthen our grasp of Mary’s virginity? Should he be a secondary figure in art, smaller, in the background, and somewhat foolishly out of place? Can artists be so bold as to portray his masculine virtues? Might Joseph have at times thought himself in an impossible situation? Are we permitted to imagine that Mary, so preoccupied with Jesus, ever even looked at Joseph—ever delighted in his presence?

In fact, there was initially a prolonged artistic silence concerning Joseph. As far as we can tell, this extended for roughly the first four hundred years of Christian history. So too in my own early life, I tended to keep my focus on Mary and Jesus. St. Augustine said of God, “Late have I loved thee, O beauty so ancient and so new!” While I was very aware of God from my earliest years, I could make Augustine’s thought my own, in due proportion, concerning St. Joseph. 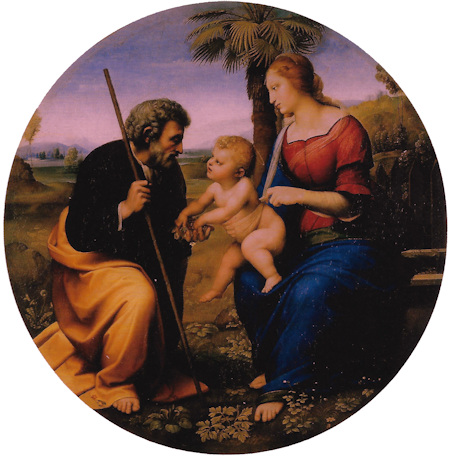 In my declining years, I have come to appreciate St. Joseph far more. When I mention “declining years”, let me just say that I was up on a ladder yesterday (OK, a mere step ladder) dealing with a problem with one of the trees in our yard, and I somehow managed to knock the ladder askew and then to follow it, in obedience to the sublime law of gravity, to the rough ground, where I did not land on my feet as I would have been almost certain to do, say, thirty or forty years ago. Of course, I am foolishly proud that I did not break any bones, despite the fact that I must owe this far more to St. Joseph than to my own vanished youth. In any case, the weaker I become, the more I recognize St. Joseph’s strength.

All of this was brought to mind especially today because our friendly podcaster, Thomas V. Mirus, who is by a remarkable coincidence both the last and the youngest of my six children, was kind enough to give me for my birthday a new book by the wonderful art historian Elizabeth Lev, entitled The Silent Knight: A History of St. Joseph as Depicted in Art. Lev tells a remarkable story of the twists and turns of Joseph’s portrayal in Christian art—a story that not only acquaints us with the art but allows us to consider our own appreciation of Joseph, our own devotion (or lack thereof) to everything Joseph cared for in his life, and the many ways in which we can draw closer to him at any stage of our pilgrimage here below.

The list of chapter titles in the book will give the reader some idea of the successive artistic trends. I’ve added dates to the titles, so you can see more clearly the historical periods in which different Joseph-themes have been emphasized (or, in the beginning, de-emphasized). Of course, to some extent the various themes overlap historically. Once the very active mendicant orders began to influence attitudes toward St. Joseph in the thirteenth century, a vigorous variety of viewpoints developed over the next several hundred years. Again, the chapter titles provide a convenient summary:

I have not provided images here to represent the various periods; I have rather simply chosen three of my favorites. The book itself is printed on glossy paper and full of photographs of the images Lev discusses as she unfolds this very readable account of awareness of—and devotion to—St. Joseph in Christian art. You can also learn more about this book and other Catholic artistic insights from two episodes of the Catholic Culture Podcast which Thomas Mirus has devoted to extensive interviews with Elizabeth Lev:

We also have some highlight clips from these interviews in the clips section of our YouTube channel.

And, again, here is the book itself: