Action Alert!
Catholic Culture NEEDS your help!: $35,724 left to match to win a $60K grant. Deadline is Pentecost, June 5th—we are critically behind! 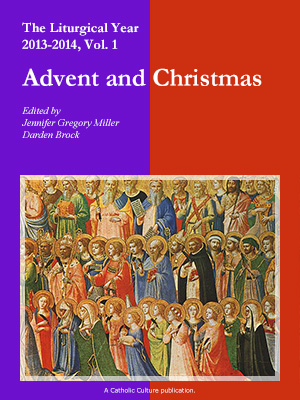 This first volume of the 2013-2014 Liturgical Year series covers all the days of Advent and Christmas, providing a rich set of resources for families to use in living the liturgical year in the domestic church, that is, in their own families. Resources include biographies of the saints to match each feast day, histories of the various celebrations and devotions, descriptions of customs from around the world, prayers, activities and recipes. The rich array of liturgical year resources on CatholicCulture.org was developed by two family and liturgical year experts, Jennifer Gregory Miller and Darden Brock. In this series, these resources are gathered together in eBooks, with one chapter for each day in the covered period. The body of each chapter includes the main biographical, historical and devotional texts for the day, with links to additional prayers, activities and recipes, and to the daily readings for the Mass. The 2013-2014 Liturgical Year series provides a wonderful way for parents, priests, and religious educators to learn how to get Catholicism into our very bones!