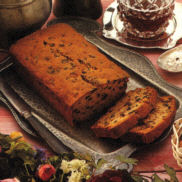 Possibly no English county celebrates yuletide with more faithful respect for ancient tradition than Yorkshire. Yorkshire is the largest of England's counties and is divided into three Ridings, ("Riding" is derived from the old Norwegian word "thriding", meaning a third part. Each of the three Ridings constitutes the administrative center for that section of Yorkshire.) — North, East and West. Each part of the county preserves its own folk identity and observes its own customs; each has its own dialect, and interprets Christmas after its own special fashion.

Distinctive as are the various areas of Yorkshire, however, the custom of eating spice cake at Christmas is universal. The traditions that accompany this pleasant rite vary from one section to another, yet Yorkshire yule cake is Yorkshire yule cake. Cooks may quibble endlessly about the nature of ingredients or the method of compounding, yet every housewife agrees that she will have as many happy months in the coming year as she has requests for yule cake!

Spice, yule or pepper cake, as it is called variously, is a rich and delicious concoction containing sultanas, currants, candied peels and spices. In the East Riding, people say yule cake should be made a day or so before the holiday and eaten on Christmas Eve. The cake should be baked round, about the size of a dinner plate, and should be three inches thick. Cheese and ale, or other spirits, usually accompany the cake. The rural housewife makes crosses on the cheese with a sharp knife, and, as is the case with plum pudding cakes, it is considered unlucky to cut either cake or cheese before Christmas Eve.

In moorland districts of the North Riding, the pepper cake, as it is called, resembles a sort of pungent gingerbread unknown to the East Riding. It is customary in these northern localities to offer each holiday guest a slice of pepper cake, a piece of cheese and a glass of gin.

In many parts of Yorkshire, boys and girls go about on Christmas Eve, visiting the various houses in the neighborhood and singing for spice cake and cheese. The traditional songs vary from place to place, but most of them resemble this old-time ditty of the West Riding:

There are as many variations of the song as there are hamlets in Yorkshire. In the southern part of the county the children are bolder in their demands. Their song goes in part:

"I wish you a Merry Christmas And a Happy New Year.
A hole in ma stocking
A hole in ma shoe
Please, can you spare
A copper or two?"

Of course, the singers are invited in to share the hospitality of the household, and are given generous slabs of spice cake, along with handfuls of coppers.

In many Yorkshire villages, Christmas (and often the New Year) is "let in" by a man or boy called the "lucky bird", who is served with spice cake, cheese and ale, or homemade wine. Nobody is supposed to leave the house until the great day is "let in", so usually the "lucky bird's" arrival is by pre-arrangement. It is safer this way, anyhow, because West Riding custom demands that the "lucky bird" have dark hair. In the East Riding he is fair. Because tradition claims that Judas Iscariot had red hair, sandy-haired men and boys are not popular! But whether the one who "lets in" Christmas is dark or light, he is lucky indeed when he partakes of Yorkshire's traditional yule spice cake.

Following is an old family recipe for the holiday spice cake. The quantities given make four loaves of cake. Use 1/4 amounts, if one cake is desired.

Cream shortening, sugar, nutmeg, lemon juice and rind until light and fluffy. Dredge fruits with some of the flour. Sift remaining flour with other dry ingredients. Separate eggs and beat yolks until thick and yellow. Add them to creamed mixture. Add the flour, a little at a time, alternating with the milk. Fold in fruits. Last of all, fold in the egg whites, which have been beaten until they stand up in peaks but are not dry.

If desired, tops of loaves may be decorated, before baking, with attractive designs made with blanched almonds, candied cherries, pineapple, and so on. In this case, place sheet of paper over the loaves while baking.

Recipe Source: From An English Oven by Dorothy Gladys Spicer, The Women's Press, New York, 1948
Find us on Social Media.