Saturday of the Thirtieth Week in Ordinary Time 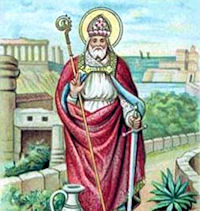 Thirtieth Week in Ordinary Time: Almighty ever-living God, increase our faith, hope and charity, and make us love what you command, so that we may merit what you promise. Through our Lord Jesus Christ, your Son, who lives and reigns with you in the unity of the Holy Spirit, God, for ever and ever.

The Roman Martyrology (2004) commemorates today St. Narcissus of Jerusalem (99-215) who was consecrated Bishop of Jerusalem about the year 180. He was already an old man, and God attested his merits by many miracles. The holy bishop had many false accusations against him, but the truth prevailed. He decided to use this as an opportunity to pursue a life of solitude, and he withdrew secretly into the desert for a time. Then Narcissus returned to Jerusalem and resumed his office. He died in extreme old age, bishop to the last.

St. Narcissus of Jerusalem
Born in Greece; died c. 215. Saint Narcissus was at least 80 when he was made the 30th bishop of Jerusalem. In a letter written in 212, Saint Alexander, who later became his coadjutor, refers to Narcissus as being 116 years old. He was one of those who at a council held at Jerusalem favored the Roman custom of celebrating Easter.

Eusebius states that in his time many of the miracles wrought by Saint Narcissus were still remembered by the people of Jerusalem. One Easter Eve, when the supply of oil for the lamps in the church had run out, Narcissus told his deacons to bring him some water from the neighboring wells. After he had prayed over it, he had the deacons pour the water into the lamps, which they did. To the amazement of the faithful, the water was miraculously converted into oil. Some of this oil was kept there as a memorial at the time when Eusebius wrote his history.Although Narcissus was ancient when he assumed the see of Jerusalem, he was not a weak bishop. He censured slackness among the laity and clergy throughout his diocese. Perhaps because of the severity with which he enforced the observance of discipline, he provoked the hostility of three perjurers who accused him of some crime that Eusebius does not specify but that the three men affirmed with violent oaths. “May I be burned alive if I am lying,” said the first. “May I be stricken with leprosy,” said the second. “May I be deprived of my sight,” said the third. Not long afterwards, the first died with his entire family in a house fire, and the second died of leprosy. The third was so terrified by what had befallen his fellow calumniators that he confessed the conspiracy and slander. His tears of repentance were so copious that he is said to have lost his sight before he died.Though vindicated—indeed few people at the time had believed the accusation brought against him—Narcissus use the scandal as an excuse to go into retreat to pray constantly without distraction, an ambition which he had long cherished.During his absence, first Dius (or Pius), then Germanius, and then Gordius filled his see. Narcissus lived in such complete solitude that it was widely assumed that he had died, and his sudden return to Jerusalem had the same effect as if he had indeed come back from the dead. He was received with great rejoicing by the people of his diocese who urged him to stay and resume his episcopal functions. Narcissus agreed but, on account of his great age, appointed Saint Alexander to help him. He continued in his office until his death, which is believed to have taken place in about 220-222 (Benedictines, Bentley, Delaney, Encyclopedia, Husenbeth).In art, Saint Narcissus is depicted as a bishop holding a thistle in blossom. Sometimes there is a pitcher of water near him or an angel is shown carrying his soul to heaven (Roeder).—Katherine Rabenstein, Saints of the DaySymbols or Usually Represented As: a bishop holding a blooming thistle; a bishop with a pitcher of water; an angel carrying a bishop's soul to HeavenPatronage: against insect bitesThings To Do: